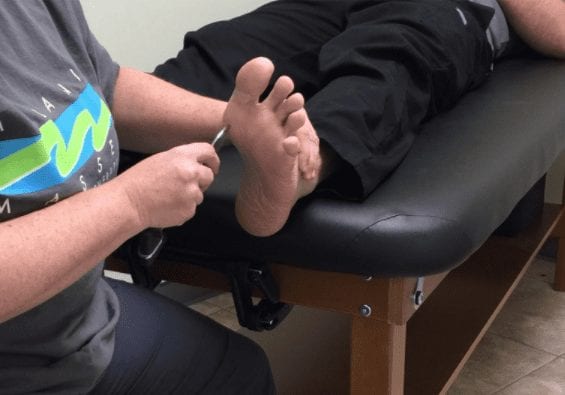 Cervical spine myelopathy (CSM) is a disorder that involves progressive compression of the spinal cord in the cervical area.  This compression can be caused by degenerative changes due to intervertebral disc disease, spondylosis, or other pathologies that cause degeneration.1  It has been referred to as one of the most common spinal cord disorders in the older populations.1  Many patients complain of stiffness in the neck, radiculopathy, and sometimes shoulder pain.2  According to Northover et al,  C5 and C6 are the most common levels for cord compression.3  With progression of cervical degenerative changes, one often begin experiencing  a loss of strength in the upper extremities and atrophy of the hand intrinsic musculature.4   CSM can best be identified through magnetic resonance imaging (MRI).  It is the best tool for definition of CSM as it demonstrates high sensitivity and specificity for cord compression.5

No cluster of tests has proven to be more beneficial than any singular test for identifying cervical spine myelopathy.  This study attempted to find a cluster of predictive clinical findings using imaging confirmation after making a clinical diagnosis in hopes of developing a reference standard for CSM.  Many tests have been studied that have a high degree of specificity and can rule in the diagnosis of CSM; however, not many have a high sensitivity, which would help rule this diagnosis out.  The tests with a high specificity are clonus,6 Hoffman sign,7-9 hyper-reflexic deep tendon responses,7,8,10 inverted supinator signs,7,11 and Babinski sign.12  When these tests are used alone, they may lead to false negatives and occasionally false positives.7  When tests are clustered together, they can help overcome the weakness of stand-alone tests.

Data was taken from 249 patients with cervical spine dysfunction from multiple conditions seen at Duke University from 2006 to 2009.  All participants were diagnosed with CSM by an orthopedic surgeon dependent on a patient’s history and physical examination.  The patient’s history consisted of deep aching pain in the neck, arm or shoulder joint that can be unilateral or bilateral, gait dysfunction resulting in clumsiness or stiffness, loss of dexterity in the hands and stiffness in the neck.  The patients also presented with “multisegmental weakness, losses during coordination testing, and variable losses of sensation and proprioception.”  When a clinical diagnosis was suspected, an MRI was done to confirm or deny the diagnosis of cervical spine myelopathy.  Each participant in this study had positive MRI findings to confirm diagnosis of CSM.  According to many studies, the diagnosis of CSM by MRI is confirmed with a reduction in the anterior-posterior width, signal changes noted in the cord, complete obstruction of the subarachnoid space, and cord compression noted with cross-sectional views on imaging.13-17  Patient’s demographic information, pain scale, neck disability index (NDI) and SF12, which is an outcome measure used to determine a person’s quality of life, were recorded and utilized as descriptive variable.  The predictive variables for the study included gait disturbances (abnormally wide-based gait, spastic gait, or ataxic gait), increased reflexes at the C5-6 level, abnormal brachio-radialis reflex (an inverted supinator sign), increased lower extremity reflexes, Hoffman, Spurling’s test or Babinski, the distraction test, clonus, and pain scores.

Thirteen clinical findings were studied including:  pain score, pain consistency, age > 45 years old, hyper-reflexia of the lower extremity reflexes (quadriceps and achilles) as well as C5,6 reflexes in the upper extremity (biceps and inverted supinator sign of brachioradialis), Spurling’s test, Hoffman’s test, clonus, Babinski, distraction test, and gait deviation.   Five clinical findings were identified in the study (gait deviation, Hoffman’s test, inverted supinator sign, Babinski test and age > 45 years old) to be good predictors of CSM.  The patients in this study displayed high specificity for ruling in CSM when 3-4 of these 5 identifiers were present.  Also, there was high sensitivity for ruling out CSM when only 1 of the 5 clinical findings was present.  These clusters may be useful in helping a clinician identify patients with CSM.

Many patients present to physical therapy for gait disturbances, which can be one of the initial complaints with a patient with cervical spine myelopathy.  Clinicians should to be aware of certain questions and objective measures to clear patients with this diagnosis.  The consistency of the IAOM-US evaluations, based on Cyriax’s teachings, is to perform a systematic evaluation every time while performing the least amount of testing for the most amount of information.  In doing the same evaluations each time, it is much easier to quickly identify discrepancies with these patients.  When performing a cervical evaluation, it is already recommended to perform upper extremity and lower extremity reflex testing as well as a Babinski as a quick screen.  Adding the performance of the Hoffman’s test can help rule in CSM.  In addition to the objective findings, the patient can quickly be assessed for gait deviations as he/she walks into your clinic for the initial examination.  Very easily and quickly, these 5 clinical findings that form a cluster with high specificity for a diagnosis of cervical spine myelopathy can be identified and the patient can be referred back to the physician for appropriate treatment. 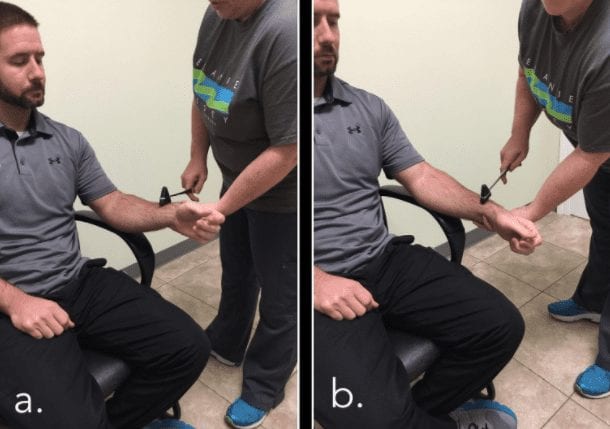 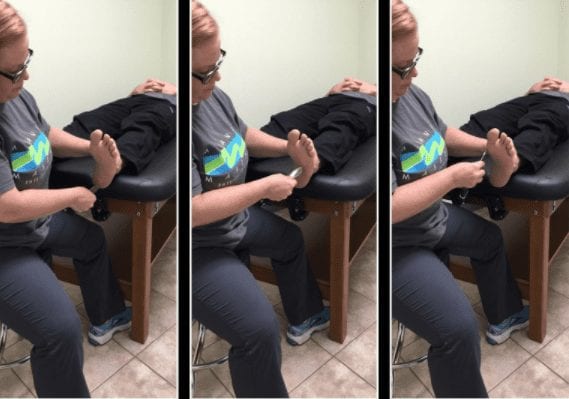