Context: Numerous studies report the fact that subacromial pain syndrome (SPS) is largely present and experienced by those in the general population. The presence of SPS is hypothesized to the be the result of torso and scapular specific muscle length and strength deficits, neuromotor control impairments, and scapular kinematic dysfunction. There are numerous studies that tout the benefit of thoracic spine thrust manipulation (TSTM). However, the studies doing so are flawed in nature due to the lack of a sham/placebo comparison group. Previous research has failed to identify why TSTM is a valid and reliable technique to perform for immediate and short-term improvements in patients experiencing shoulder pain. As a result, more extensive studies are necessary to determine the mechanisms responsible for the improvement of shoulder pain specifically SPS.

Objective: The researchers set out to determine the immediate and short-term (48-hours) effects of TSTM when performed from different positions (seated versus supine) on a patient’s pain and function while experiencing SPS. The researchers wanted to determine the effects of TSMT on scapular muscle strength (middle trapezius, lower trapezius, serratus anterior), scapular muscle length (pectoralis minor), and scapular function (scapula upward rotation and scapula posterior tilt) as it relates to scapular kinematics.

Patients or Other Participants: Sixty patients were found through recruitment flyers and emails to participate in the study. Fifty-seven of the sixty patients completed the study after the 48-hour follow-up period.

Main Outcome Measure(s): The researchers assessed pain and functional ability both pre- and post-TSTM in the immediate and short-term. The Penn Shoulder Score was used to assess self-reported pain, satisfaction, and function. The scapular function testing included both active and passive scapular upward rotation and posterior tilt, pectoralis minor length, peak isometric muscle force of the middle and lower trapezius and the serratus anterior.

Conclusions: This randomized clinical study found no difference in a patient’s immediate and short-term pain and dysfunction associated with SPS. The patients did show non-significant improvement in pain, function, and satisfaction through the Penn Shoulder Score. Scapular kinematics were found to non-significantly improve for a majority of motions and within all groups except for passive upward rotation in the seated group, active posterior tilt in the supine, and passive posterior tilt in the supine group. Muscular strength was found to improve non-significantly for all groups and at all muscle’s tests. The pectoralis minor index was also found to non-significantly improve within all three groups.

Clinical Impression: The utilization of TSTM to treat SPS and other glenohumeral conditions is something I regularly observe and personally perform. I perform these techniques only when a thorough examination has been conducted and all precautions and contraindications have been ruled out. I use these techniques not only with SPS but with most other scapulohumeral pain conditions that result in muscle length, muscle strength, and scapular kinematic dysfunctions. Personally, I choose to perform these techniques only when the patient has shown the necessary glenohumeral range of motion to allow for textbook performance of the technique. This often is not allowed until the patient has already undergone numerous visits of physical therapy to my clinic. This approach noticeably differs when compared to the manner in which the TSTM was performed within the study. The researchers utilized the application of TSTM initially in their research plan and not numerous sessions into a physical therapy treatment plan. Also, I do not always perform TSTM mainly to reduce pain at the shoulder but to positively influence scapular muscle length, strength, and function through improved scapulothoracic mobility. Generally, through the use of TSTM my patients report a sense of improved ability, which contradicts the findings of this study. The study argues that the utilization of the TSTM is not effective in immediate and delayed pain and function.

Consistency of the Content: Throughout most of my formal physical therapy education pain relief and improved function was of the most importance. I was taught that thoracic spine thrust manipulation can be utilized as an appropriate therapy procedure to reduce pain associated with rotator cuff pathology and subacromial impingement. Boyles RE et al.1 found through verbal pain reports, the Shoulder Pain and Disability Index (SPADI), and the global rating of change (GROC) that when a thoracic spine thrust maneuver was performed people with shoulder impingement syndromes often felt relief from pain. The current article did find positive improvements in pain and function however there was no difference between the experimental and the sham group calling into question the validity of such thoracic spine manipulations. Furthermore, I was suggested the possible positive correlation between thoracic spine manipulation and improved strength into the scapular stabilizers including the middle trapezius muscle. Muth et al.2 was able to verify this finding through their research however this particular article once again showed that the sham group had an increase muscle activity and there was no significance between all three groups. 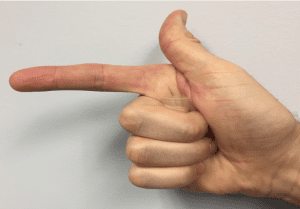 • When performing a patient supine thoracic spine thrust manipulation (TSTM) the hand position the therapist can choose to utilize is often termed the “gun.” This is represented by the picture above. To protect the fingers from irritation due to over flexion the therapist can grip a pen cap with a flexion grip at the 3rd – 5th fingers. Please refer to the picture above. 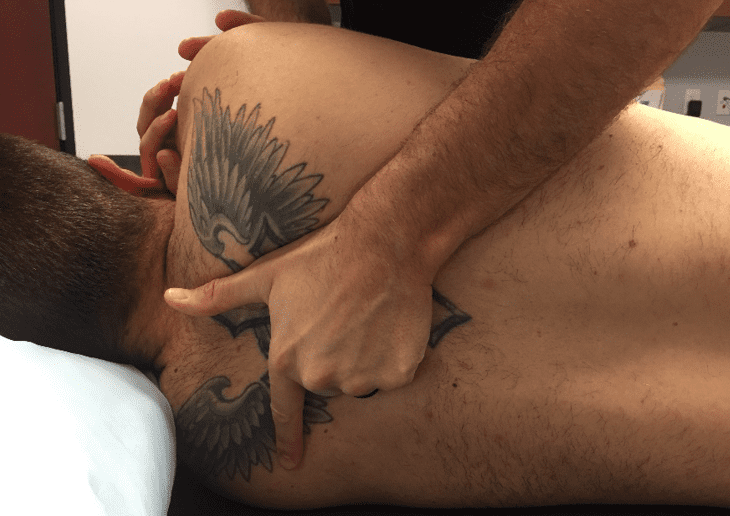 • The patient is placed on his/her side while the therapist stands ventral to the patient. The therapist places his/her caudal hand at the appropriate thoracic spine level with the tip of the spinous process in the space available between the thenar eminence and the dorsal middle phalanx of the 3rd digit. For this example, the hand placement was located at the T3 thoracic vertebral level. Please refer to the picture above. 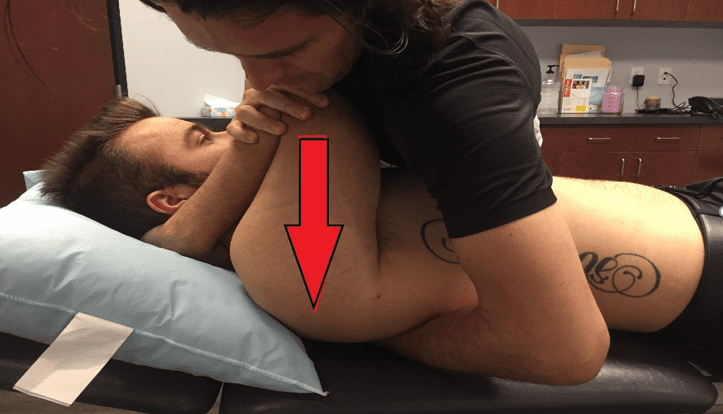 • The patient is asked to wrap his/her hands around the dorsum of their neck and interlock their fingers. The patient maintains this position and is then rolled onto his/her back. The therapist maintains the “gun” hand position at the T3 spinous process while the patient is rolled onto his/her back. From this position the therapist delivers a TSTM through a dorsally directed thrust action in line with the patient’s humeri. This is indicated by the red arrow presented on the patient’s right lateral humerus above. 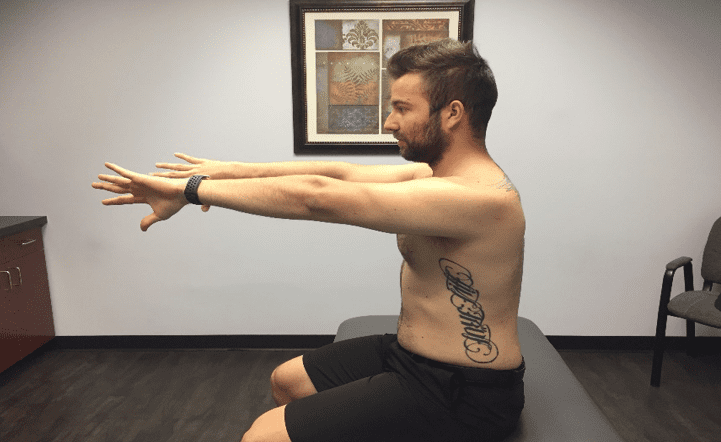 • For the seated proximal thoracic spine thrust manipulation into the C7-T4 region the patient will sit on the plinth with the hands forward and the humeri in an internally rotated position with the forearms in a pronated position. 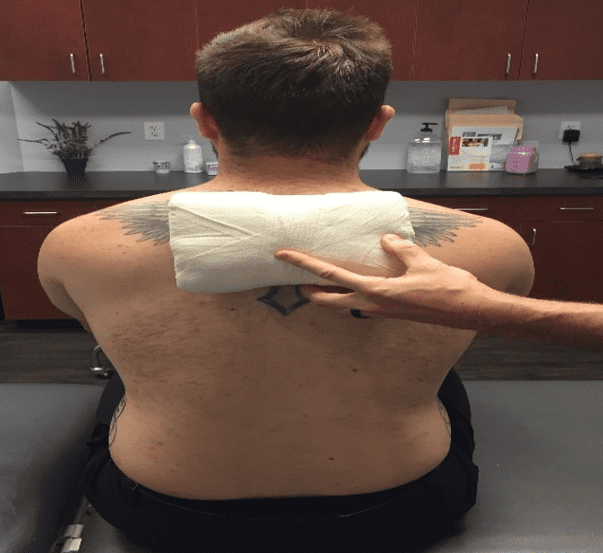 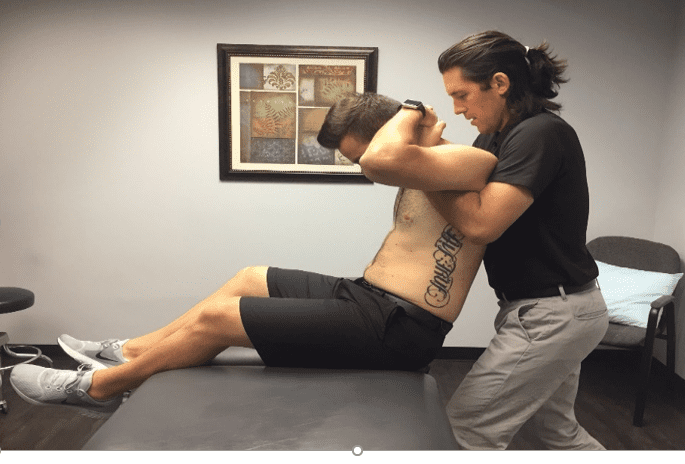 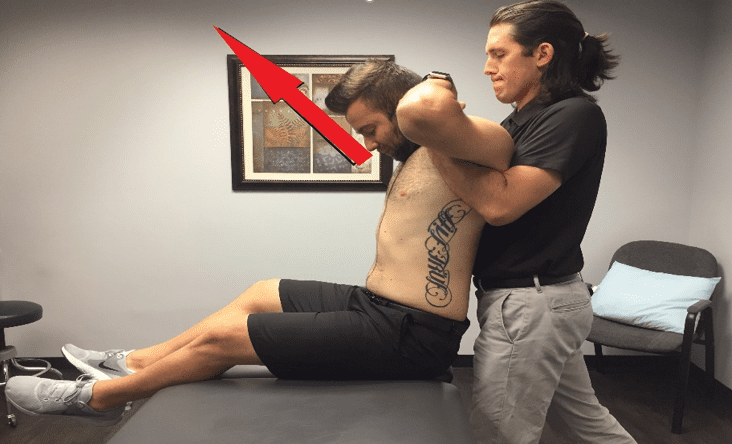 • When the patient is correctly positioned for the performance of a TSTM the patient is asked to inhale and then follow the inhalation with a deep and complete exhalation. With the patient’s exhalation the therapist stands up through the performance of knee extension to take up any extra patient soft tissue laxity. The therapist maintains this new position and then performs a high velocity low amplitude thrust manipulation action in a ventral and cranial direction as is represented by the red arrow in the picture above. The force necessary to generate the manipulation is generated by the therapist sternum and the force is delivered into the dorsally located towel prop that is located on the patient’s proximal thoracic spine. Once the manipulation is performed the patient is to be held in the post-manipulation position for 1-2 seconds and then slowly lowered to the start position.