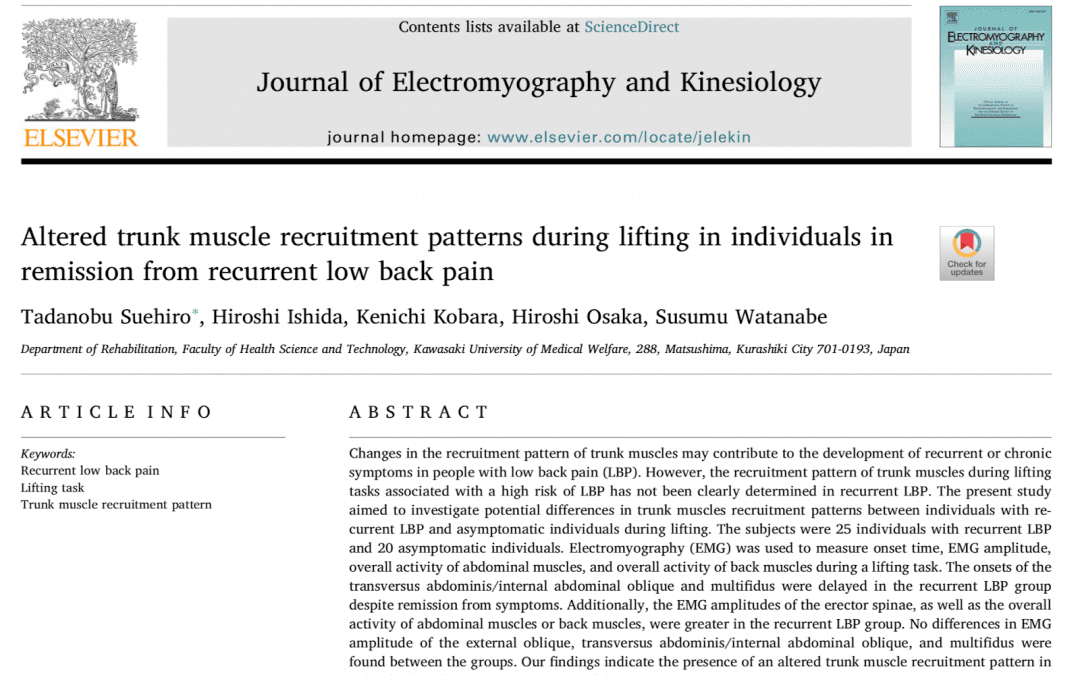 Context: Low back pain (LBP) has been associated with altered local and global muscle function and impaired motor control. The pattern of trunk muscle activation during lifting tasks has yet to be well established in subjects with recurrent LBP.

Objective: To determine whether trunk muscle recruitment, timing and amplitude differ between in subjects with recurrent LBP and healthy controls during lifting tasks. Researchers did not state a hypothesis a priori.

Design: A quasi-experimental study design was used and the study years of the study and duration were not reported.

Setting: The study was performed in a laboratory setting at a research university in Japan.

Participants: A total of 25 individuals with recurrent LBP (mean age: 26.8±5.2; 15 male) and 20 healthy controls (mean age: 27.1±7.6; 12 male) were recruited from a sample of convenience. Subjects were included in the recurrent LBP group if they had a previous history of 2 or more episodes of LBP that impaired function but were not experiencing symptoms currently. Participants were excluded if they had orthopedic or neurologic disorders, previous spinal surgery or were pregnant in the last 2 years. Specific inclusion and exclusion criteria were not reported for the control group.

Intervention(s): Electrodes were placed unilaterally on the external oblique (EO), transverse abdominis / internal oblique (TrA/IO), erector spinae (ES), lumbar multifidus (MF) and anterior deltoid to record electromyography (EMG) data. Subjects were standing and held a box weighing 5 kilograms that was placed on a table. Participants were positioned in 0° of elbow extension and 40° of shoulder flexion and wore an angular rate sensor on their right wrist. Upon illumination of a light, individuals raised the box as quickly as possible to contact a bar set at 90° of shoulder flexion and held the position for 3 seconds. A pressure sensor under the box was triggered upon lifting and initiated EMG data collection.

Main Outcome Measure(s): The percentage of maximal EMG was determined for each muscle. The IO and EO were grouped and ES and MF were combined to represent both the abdominal and back musculature. The relative onset difference was calculated in milliseconds and was determined by comparing the onset of trunk muscle activation to the anterior deltoid. Peak angular velocity was measured in degrees per second and pain severity was recorded with a numerical pain rating scale.

Results: No differences in peak angular velocity was observed between groups (p=.63). The onset of the TrA/IO (p<0.001) and MF (p<0.001) activity were significantly delayed in the recurrent LBP group. No significant differences were found in the EO (p=0.14) and ES (p=0.052) onset between groups. A significant increase in EMG amplitude was found the abdominal muscles (p=0.04) and back muscles (p<0.01) of the recurrent LBP group.

Clinical Impression: The results of this study are clinically relevant as patients with recurrent LBP may present with altered motor programming during lifting tasks. Pain and structural damage may result in fear, altered proprioception and changes in motor control. The clinician should be mindful that altered feedforward processing may persist when low back pain symptoms are in remission. Increased trunk muscle EMG amplitude may represent a motor control strategy that is protective in nature and aims to improve lumbopelvic stability. A comprehensive clinical examination should be performed to assess local dysfunction and identify the structure responsible for pain generation. Neuromotor and somatosensory control should be evaluated throughout the duration of care and motor control strategies should be performed in concert with manual interventions.

Brent Denny PT, ScD, COMT Comments: I find this study very interesting.  First, there are differences in how pain free subjects with a history of recurrent low back pain program their trunk motor activity compared to pain-free subjects during a functional, loaded lifting task. Second, these differences include delayed local muscle preparatory activation including the transverse abdominis, internal oblique, and multifidus compared to the prime mover deltoid muscle. This delayed local trunk activation will result in decreased spinal stability that may feed into spinal pain and dysfunctions. Moreover, the prime move efficiency will be diminished, affecting the upper extremities’ movement and load capacity.

I agree with Matthew that many variables may feed into these persistent, altered motor patterns. Comprehensive care should include assessment and specific treatments for these causative factors. This is in an effort to approximate motor behaviors and movement control as demonstrated by non-painful subjects during functional lifting.

Dr. Sizer PT PhD OCS FAAOMPT Comments: I agree, Brent! We see patients routinely presenting in the clinic with altered control that persists even after their pain resolves, as evidenced in this study. Such a find represents altered underlying control mechanisms. We have a chance to work with these patients to help reduce their risk of recurrence. We have the chance to establish a successful alliance with patients to get them to a recovered state, even though it may take some time to get them there. This is where we like to incorporate a functional examination and corrective strategies, accompanied by encouragement to stick with the program even when their pain is resolved. Patients love to learn about ways to improve their control and this gives us a great platform to engage control while they increase their activity level.