Can Neck Exercises Enhance The Activation Of The Semispinalis Cervicis Relative To The Splenius Capitus At Specific Spinal Levels? 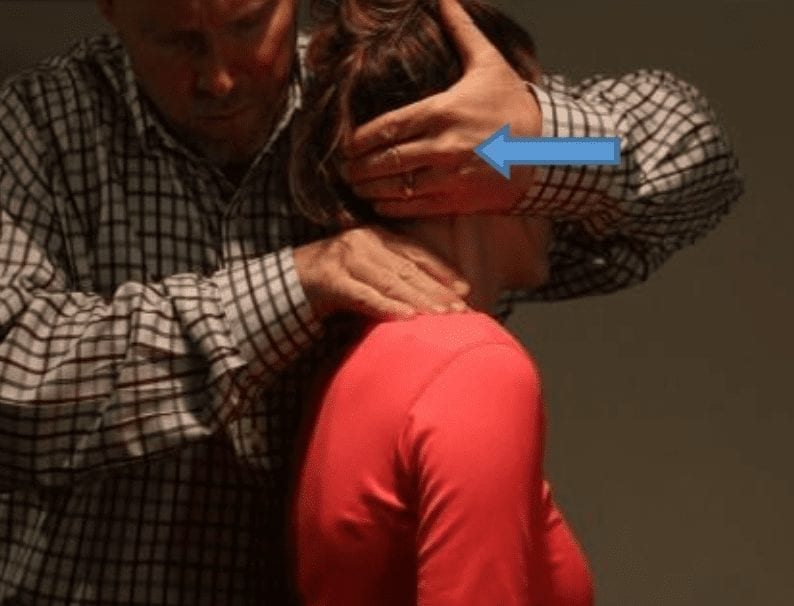 Using intramuscular electromyography (EMG), this study investigated the activity of the deep semispinalis cervicis and the superficial splenius capitis muscle at two spinal levels (C2 and C5) in ten healthy volunteers during a series of neck exercises:

Ten healthy volunteers (3 men and 7 women; age 30.7+/-7.4 years; height 170+/- 8.8 cm; weight 67.6+/-24.8 kg) without neck pain participated.  Intramuscular EMG, guided by ultrasound, was acquired from the semispinalis cervicis and splenius capitis muscles at the level of the 2nd and 5th spinous processes on the right side.  The subjects were placed in a prone position with the head slightly flexed.  The deep cervical artery, which lies in the fascia separating the semispinalis cervicis from the splenius capitis muscle, was visualized with Doppler sonography prior to the insertion of the needle.  The needle was inserted at the spinal levels of C2 and C5 vertically into the semispinalis cervicis and at a 45 degree angle into the splenius capitis.  Once the target muscles were identified by ultrasound, the needle was removed leaving the wire in the muscle belly for the duration of the experiment.  A reference surface electrode for each wire was placed adjacently (mastoid process, spinous process C7, and for the levels of C2 and C5) and a further common reference electrode was placed around the wrist.

The participants were then seated in a device to measure neck muscle force (Cervical-Multi unit, BTE technologies, USA).  Three maximum voluntary neck extension contractions were measured and the highest value of force was selected as the maximal force.  The subjects then performed isometric exercises against manual resistance in sitting resisting axial traction and compression (Figures 7, 8), extension and flexion (Figures 1-4), and standing in front of a table propped up on both forearms in extension (Figures 5, 6).  Each exercise was repeated twice for approximately 10 seconds during which EMG activity was recorded.  The intensity of the resistance was applied with the maximal force that each subject could counteract without discomfort from the investigators hands/fingers over the neck.  Manual resistance could not be standardized so the ratio between normalized root mean square (RMS – estimated amplitude of the EMG signal) of the semispinalis cervicis and splenius capitis was calculated and compared across conditions. 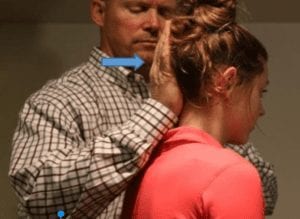 Figure 1: Subject retracts head and neck against the extension resistance at the occiput 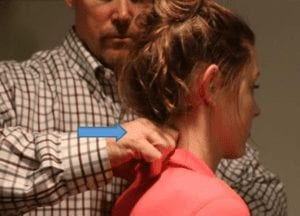 Figure 2: Subject retracts head and neck against the extension resistance at C1. 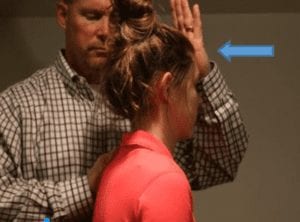 Figure 3: Subject protracts head against the flexion resistance at the occiput. 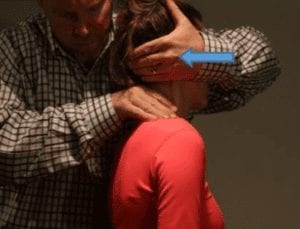 Figure 4: Subject protracts head against the flexion resistance at C4 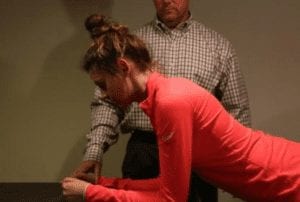 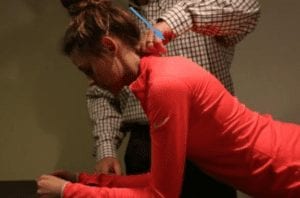 Figure 6: Propping on elbows with resistance in extension at the level of C4. 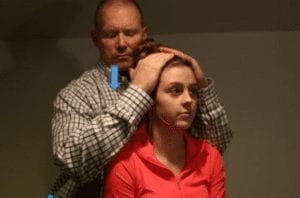 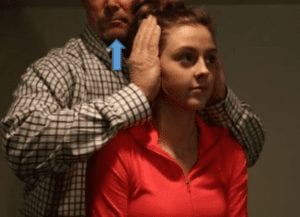 Figures 7-8: Compression and traction respectively while asking the patient to resist the downward or push upwards.

This study evaluated and confirmed, for the first time, the ability to enhance the activation of the semispinalis cervicis muscle relative to the splenius capitis at different spinal levels with targeted exercise interventions.

Resistance in cervical Flexion and Extension:

Methodological considerations and limitations of the study:

Since resistance applied over the vertebral arch was found to activate the semispinalis cervicis relative to the splenius capitis directly caudal to the site where the resistance was applied, this concept may prove to be useful if applied to people with neck pain who have shown to suffer from impairment to this muscle during clinical testing.

So, a good question to ask at this point is how do you know in clinical practice when the semispinalis cervicis is weak and is it weaker in patients with chronic neck pain?  The answers to these questions were alluded to in this abstracted study but no testing was performed to measure weakness because the test subjects in this study had no neck pain.  Can we make the assumption that weakness is occurring in muscles showing a higher concentration of fat, variable cross-sectional area and higher proportions of type II fibers?  I think we can, but is there a clinical test to show it?  Not that was shown in this study.

Quote from the previous IAOM CTL-Safe course: “The musculoskeletal system of the cervical spine is among the most complex of the human body.  Cervical muscles demonstrate marked morphological diversity to permit and control the wide variety of head movements that are possible.  Untrained individuals are unable to maximally activate cervical muscles (Conley ’97).”

With this in mind, it is important that we include appropriate stabilization training that encompasses the complete cervical spine.  This is the attempt of the Sensoimotor Control and Rehabilitation of the CT Spine (SenMoCOR) course taught Phil Sizer Jr., PT, PhD, OCS, FAAOMPT with the IAOM-US.  The information contained in this article is an effective precursor to the SenMoCOR program.  Emphasis in this article is placed on the semispinalis cervicis, a deep cervical postural stabilizing muscle, similar to the multifidus.  When used as a neuromuscular re-education (NMR) tool post cervical mobilization, it can be an effective means to keep the newly gained range of motion in addition to activating the appropriate deep cervical extensors that are important in the stability of the cervical spine.  This article studied the C2 and C5 levels but I believe that activation of the semispinalis cervicis could be emphasized at all cervical levels, especially as a NMR tool.  For activation of the semispinalis cervicis after mobilization, have the patient push gently retract (2-3 lbs. of force) while you are providing resistance at the vertebral arch.  A light force of resistance is recommended because as previously mentioned above, in the study by Blouin et al. 2007, multiple muscles can be recruited at lower loads to generate a required force in a desired direction, while at higher loads the primary muscles are predominately recruited.

Since resistance applied over the vertebral arch was found to activate the semispinalis cervicis relative to the splenius capitis directly caudal to the site where the resistance was applied, it is important that surface anatomy for the cervical spine be emphasized.  The IAOM recommends beginning with the Frankfurter position, which is performed when the dorsal-most part of the occiput is in line with the dorsal-most aspect of the thoracic spine and the lower part of the orbit is in line with the external auditory meatus.  C1 is then found between the mastoid and the posterior angle of the mandible, anterior and deep to the sternocleidomastoid muscle.  C2 is the first spinous process caudal to the external occipital protuberance, C3 is found at the level of the hyoid bone, C4 at the level of the v-notch of the thyroid cartilage, C5 is found at the 3plates of the thyroid cartilage and C6 is located at the level of the 1st ring of the cricoid cartilage.

While not mentioned in this article, a home exercise program could be used to apply these principles for strengthening the semispinalis cervicis.  A Mulligan strap or similar strap could be used as pictured below (figures 9 and 10).  I recommend an isometric resistance of 2-3 lbs. into extension against the strap for a 3-second hold for a total of 3 sets of 25 repetitions or as symptoms will allow (72 repetitions over a 15 minute period for 7 consecutive days was shown to improve long-term motor learning – Boudreau et al. 2010).  All cervical levels can be treated in this manner.  You can also implement proprioceptive training using guided imagery with “thinking” looking up and “thinking” looking right or left while maintaining the resistance to add an additional component to the exercises. 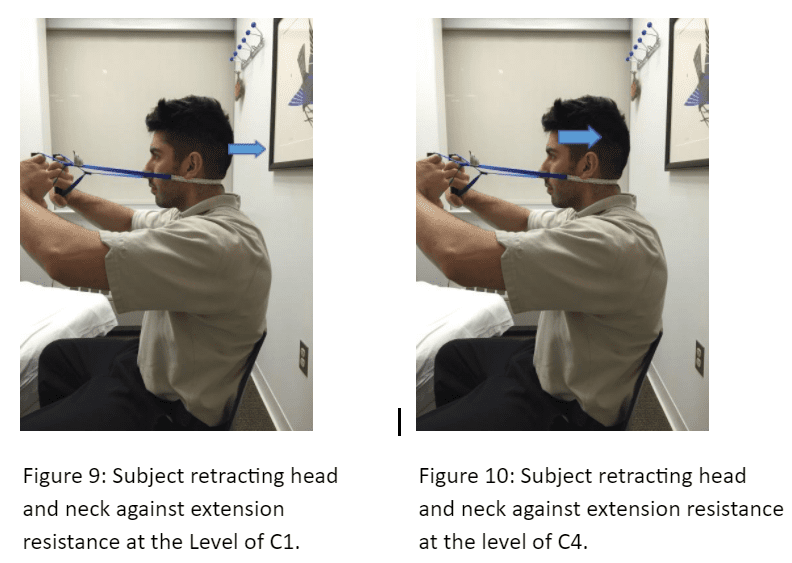