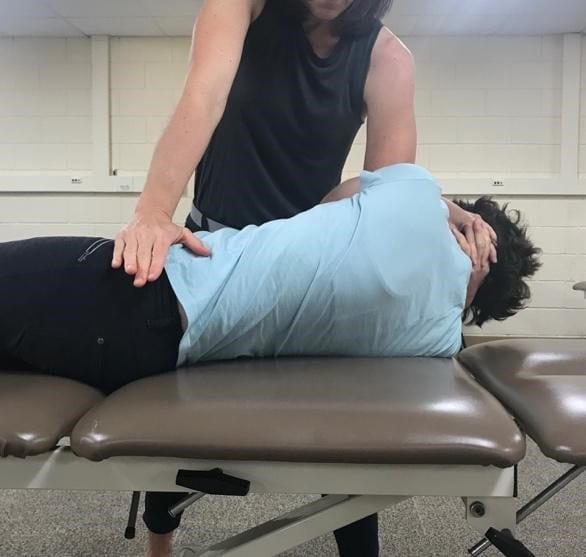 Spinal mobilization and manipulation are among the interventions that have resulted in improved clinical outcomes among patients with a variety of painful conditions. Researchers have compared the effectiveness of the low-velocity mobilization versus the high-velocity manipulation techniques and found conflicting evidence for which technique yielded superior results.1-3 Investigators propose that spinal manipulation can result in hypoalgesia by changing the afferent discharge from spinal structures by reducing temporal summation.4-7 In a study of 60 asymptomatic adults, subjects demonstrated hypoalgesia following lumbar spine manipulation in sites innervated by the lumbar spine that were specific to C-fiber mediated input.7 These findings support the theory that spinal manipulation may act as a “counter-irritant” or alternative input that reduces temporal summation at the spinal cord level. It has not been well established whether the manual therapy intervention needs to be delivered at high velocity to be effective for improving patient outcomes.

In addition to identifying the best intervention, classification of patients who are likely to respond well to manual therapy has been a daunting task for researchers and clinicians alike. Temporal summation, a pain faciliatory process defined as increased pain sensitivity in response to repeated noxious stimuli, is the result of increased dorsal horn excitability. Bialosky et al. recently suggested that patients could be categorized based on the response to repeated noxious stimuli as enhanced temporal summation or blunted temporal summation.8 Given the response variability among subjects during quantitative sensory testing, particularly when using a fixed thermal heat paradigm, recent efforts have been made to classify subjects according to their response to repeated stimuli.9 A study by Anderson et al. identified three distinct clusters of how adults respond to repeated noxious stimuli: 1) those who experience no change in perceived pain intensity over time (58%), 2) those who experience an increase in perceived pain intensity over time, termed a facilitatory response (30%), and 3) those who experience a decrease in perceived pain over time, termed an inhibitory response (15%).9 For the study conducted by Penza et al., the authors’ primary objective was to examine the attenuation of temporal summation of heat pain (TSP) in healthy adults following high-velocity low-amplitude spinal manipulation (SMT) versus low-velocity low-amplitude spinal mobilization (MOB). They hypothesized that subjects who received SMT would experience a greater reduction in TSP compared to subjects who received MOB and a control condition (REST). A secondary sub-group analysis was performed to compare TSP attenuation between treatments and among the three clusters of responders. They hypothesized that they would see the greatest TSP attenuation following SMT on the facilitatory cluster.

Methods: Ninety-two healthy volunteers between the ages of 18 and 65 with no painful condition or history of low back pain or surgery participated in this study. Subjects were randomized to one of three treatment groups (SMT, MOB, REST). Examiners and subjects were not blinded.

Interventions: SMT was performed with the subject in supine. The subject was passively side-bent away from the therapist and the trunk was rotated toward the therapist. A high-velocity thrust was delivered through the contralateral ASIS (Figure 1).

Figure 1. SMT – subject’s trunk was side bent to the left, rotated to the right toward the examiner. The subject takes a deep breath. At the end of exhalation, a posterior-inferior thrust is delivered to the ASIS. 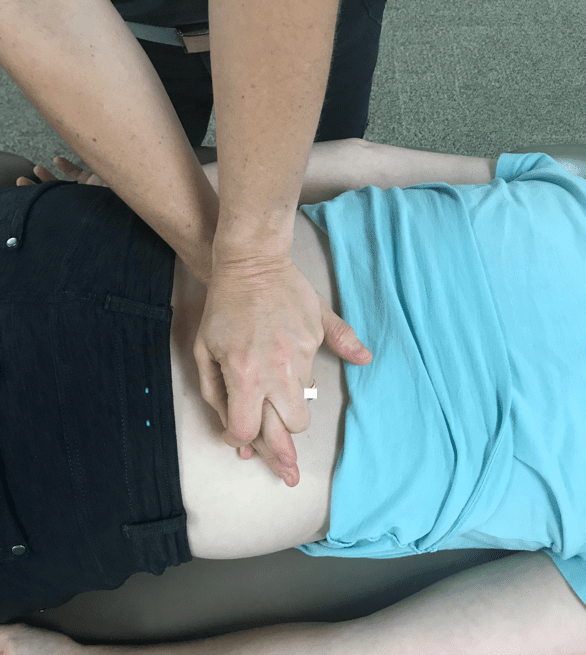 For the REST conditions, subjects were instructed to rest quietly in supine for 5 minutes.

Pain Sensitivity Assessment: Subjects were given a 101-point numeric pain rating scale (NRS) or a 100-mm mechanical visual analog scale (MVAS) to rate their pain before and immediately after the intervention. A computer-controlled device was used to deliver all thermal stimuli to each participant’s skin immediately before and after the intervention. Participants received a block of 10 unchanging thermal stimuli delivered quickly one after the other. Each stimulus increased from 39o C to 50o C and remained at peak temperature for less than 1 second and returned to baseline via active cooling. The stimulus was given to a randomly selected upper or lower extremity. If the upper extremity was assigned as location 1, the lower extremity was considered location 2. The sequence of testing was as follows: location 1, location 2, intervention, location 1, location 2. Pain sensitivity was measured either on the thenar eminence of the hand or the plantar arch of the foot.

Results: No main effect for treatment type was seen in the upper extremity (thenar eminence). The cluster analysis for this group of subjects was consistent with previous reports, specifically 1) 52% of subjects experienced no change in pain perception with repeated heat stimuli, 2) 26% of subjects experienced increasingly greater pain perceptions (facilitatory group) with repeated stimuli, and 3) 22% of subjects experienced decreasing pain perception (inhibitory group) with repeated stimuli. With regard to psychological outcome measures, significant differences in fear of pain, particularly fear of medical pain and severe pain, were seen among the three clusters (p < .05). Not surprisingly, the facilitatory group demonstrated higher fear than the inhibitory group. The no change group was not different than the others regarding fear of pain. A significant treatment effect was observed across subgroups at the foot. In the inhibitory group, TSP attenuation was seen following SMT and MOB compared with REST. In the no change and facilititory group, the effect of SMT, MOB and REST was similar.

IAOM Commentary: When a treatment effect was seen in this population of healthy adults, there was no difference between SMT and MOB. Both the high-velocity and the low-velocity joint-based manual therapy technique resulted in TSP attenuation in the inhibitory group. The authors’ hypothesis that the facilitatory group would experience the greatest TSP attenuation was not supported. Their theory was based on the idea that the facilititory group would have the most “room for improvement,” however, the results suggest that the individuals who are most likely to respond to manual therapy and experience TSP attenuation are those already likely to inhibit. In this study, treatment effects were localized to the foot, supporting the claim that spinal cord mechanisms play a role in pain sensitivity attenuation. The IAOM promotes a systematic clinical examination for the purpose of establishing an accurate diagnosis, determining the individual patient factors that impact treatment, and sound clinical reasoning when designing a plan of care. Successful identification of individuals who are likely to respond to manual therapy may increase treatment effectiveness. A clinically useful tool for evaluating patient responsiveness to manual therapy has not been well established. The prognostic value of using temporal summation in patients with spinal pain is in its early stages. Patients classified as inhibitory may have a better prognosis for manual therapy than those classified as facilitatory. Clinical prediction rules originally purported to guide clinical decision making for the use of manual therapy; however, lack of validation of these guidelines has resulted in decreased enthusiasm for their utility.8 As we increase our understanding of the mechanisms of manual therapy for pain modulation, perhaps our tools for examination and evaluation of patients for the purpose of identifying which individuals will respond to manual therapy will become sharper.