Research: The purpose of this research was to explore potential pain generators resulting in posterior hip and sciatica-like pain as well as review the diagnostic criteria, imaging, and treatments for those pain generators.

IAOM-US comments: Posterior hip pain is a relatively common complaint in outpatient orthopaedics and is frequently associated with lumbar pathology. In the absence of clinical findings or radiological exams correlating the patient’s symptoms to the lumbar spine, consideration of alternative pain generators and entrapments sites is warranted. Deep gluteal syndrome is described by Park et al (2020) as the compression of the sciatic or pudendal nerve in the deep gluteal space resulting in pseudosciatica. Deep gluteal syndrome is further subdivided anatomically into ischiofemoral impingement syndrome, piriformis syndrome, hamstring syndrome, and gemelli-obturator internus syndrome (Figure 1). While piriformis syndrome is a relatively common clinical diagnosis the remaining syndromes are more obscure in the literature and clinical differentiation between them is challenging. The IAOM wishes to elucidate the differences in presentation between these syndromes to facilitate differentiation in a clinical setting.

Hamstring syndrome: Hamstring syndrome is the entrapment of the sciatic nerve as the nerve courses through a fibrous band from the biceps femoris insertion at the ischial tuberosity. A history of episodic hamstring injuries as well as history of low back pain can predispose the sciatic nerve to this condition. Hamstring syndrome is common in runners, sprinters, and jumpers. Pain is normally localized to the ischial tuberosity and is worse with activity (particularly heel strike during gait) and with sitting. Resisted knee flexion with the lower extremity in a straight leg position is painful (Figure 3) whereas resisted knee flexion in prone is painless (Chamberlain 2021, Martin et al 2015). Pain can also be provoked with neural tension testing such as the straight leg raise.

Ischiofemoral impingment (IFI) syndrome: IFI is defined as a narrowing of the space between the lateral aspect of the os ischium and the lesser trochanter of the femur with entrapment of the soft tissue structures in this region (Gollwitzer et al 2004). IFI was first identified as a complication following total hip arthroplasty with patients reporting persisting pain in the medial thigh and groin, but clinical symptoms of IFI have also been described as load dependent pain of the lower buttock and or groin, a snapping or clunking sensation during gait, and pseudo-sciatica symptoms down the posterior leg. With ischiofemoral space narrowing, tearing or edema within the quadratus femoris and proximal hamstrings can occur lending to irritation of the sciatic nerve due to its proximity. Few clinical tests exist for this condition but do include the long-stride walking test as well as symptom reproduction with palpation of the ischiofemoral space. The long-stride walking test has been described as positive for IFI with reproduction of patient’s symptoms with running or larger steps due to the narrowing of the space between the ischium and the lesser trochanter during terminal hip extension. An additional test described by Johnson et al (1977) includes passive hip extension, adduction, and external rotation with reproduction of the patient symptoms (Figure 4). MRI imaging is the radiological exam of choice with findings of narrowed IFI space and quadratus femoris edema or partial tearing.

Gemelli-obturator internus (GOI) syndrome: The sciatic nerve runs posterior to the obturator and gemelli complex after passing the piriformis, lending another potential region for entrapment. The piriformis’ anatomical insertion can be variable; it may join with the tendons of superior gemellus and obturator internus (29.5%) or the tendons of obturator internus and gluteus medius (13.4%) before its insertion on the greater trochanter (Balius et al 2018). The sciatic nerve is attached to the gemelli-obturator internus complex via connective tissue and can become entrapped with these two insertional variants. Clinically, symptoms are consistent with other sciatic entrapment syndromes but currently no specific test or cluster of tests exist to identify this syndrome making it more of a diagnosis of exclusion (Leigh RE 1952). 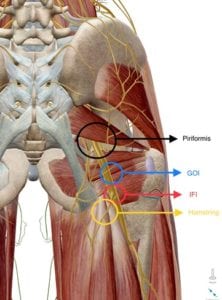 Figure 1: identification of the locations of the symptoms discussed. 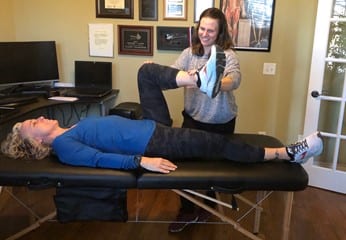 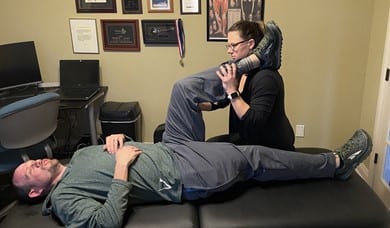 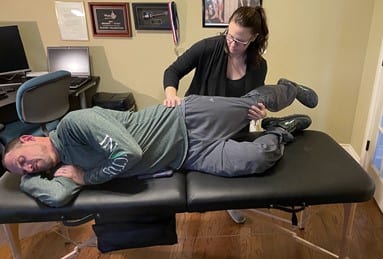