Effects of hip joint mobilizations using a mobilization belt on hip range of motion and functional outcomes: A Case Series

Brun A, Sandrey M. The effect of hip joint mobilizations using a mobilization belt on hip range of motion and functional outcomes. Journal of Sports Rehabilitation. 2021; 30:559-567.

Purpose: The purpose of this study was to examine the immediate effects of Maitland hip joint mobilization techniques using a Mulligan mobilization belt and evaluate range of motion (ROM) and functional outcomes in active participants when comparing pre-intervention to post-intervention. Secondary outcomes were to evaluate the efficacy of the mobilization protocol.

Methods: This study involved test/re-test with pre-mobilization and post-mobilization measurements taken for each participant during each of the three sessions. Twenty healthy college participants (11 males/9 females) (20.56 +/- 1.5ys) were recruited. Inclusion criteria were not having any lower extremity (LE) (hip to ankle) injuries within 6 months, LE surgeries within 1 year prior to the study, history of hip instability, participation in yoga multiple times a week, neither engaged in foam rolling nor stretching prior to each study session. Eligible subjects needed to attend one testing session each week for three consecutive weeks and refrain from strenuous exercises 24 hours prior to each study session. The three sessions were 7 days apart, lasting 30-60 minutes. Independent variables were limb (dominant/non-dominant) and time (baseline and immediately after mobilizations). Dependent variables were hip ROM for six standard hip movements (flexion, extension, abduction/adduction, internal/external rotation). Functional testing involved a modified STAR Excursion Balance Test (mSEBT) using anterior, posterior lateral and posterior medial motions as well as time to complete an agility T-test. Hip ROM was taken first session, mSEBT was taken the second session and the agility T-test was taken during the third session as pre-mobilization and post-mobilization measurements were recorded for each participant during each session. A digital goniometer was utilized for ROM measurements 3x each side with the third as the final measurement. 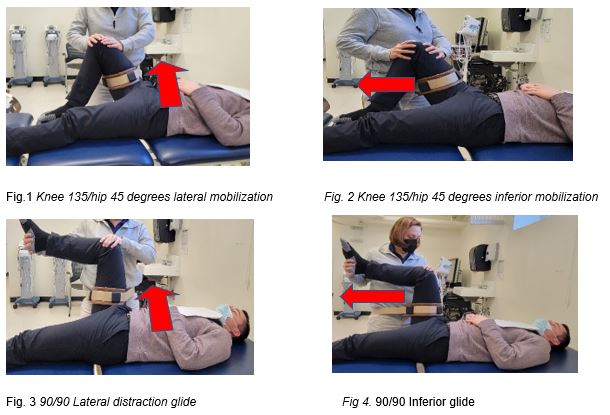 Conclusion: The authors concluded that the effect of hip joint mobilizations significantly improved adduction, internal and external rotation as well as posterior lateral and posterior medial of the mSEBT using Maitland mobilization protocol. Limitations included more studies are needed to validate results with more restricted ROM as well as more than three sessions for mobilization/testing. The authors suggested more longitudinal studies would be more clinically meaningful.

IAOM-US Commentary: Few studies have researched utilizing a belt for hip mobilizations for increasing hip ROM and functional outcomes. This study emphasized the immediate effect of technique/direction of force as well as the functional assessment after mobilization. Several methodology factors may have affected the author’s anticipated outcome. The recruitment of the subjects was not specifically addressed such as to why only twenty subjects were selected, assuming utilization of college volunteers. The volunteers did not require randomization as this study did not utilize a control group for a comparison. The study also relied only upon young healthy subjects without large limitations of motion therefore challenging to note improvements in response. Overall, these aspects likely impacted their outcomes. The treatment outcomes may have improved if subjects initially presented with greater motion restrictions. The data only revealed 2 degrees of improvement, a statistical significance although not necessarily impactful for clinical outcomes or translation to function. As the study emphasizes the immediate effect of the intervention, there is not mention of any long-term effects that would be clinically relevant. During the treatment the authors utilized a mobilization belt for the patient, although did not utilize any stabilization force for the patient on the plinth. Thus, decreasing the possible results of the mobilizations on the joint. Finally, the same investigator performed the digital ROM measures also performed the mobilizations, which could introduce high bias to the study.

Biomechanics of the hip are viewed in a three-dimensional pattern due to nature of the acetabular inclination. Flexion involves flexion, abduction, and internal rotation while abduction requires abduction, extension, and external rotation [1]. The authors used positioning in a single plane of 45 degrees hip flexion and 135 degrees knee flexion as well as 90/90 positioning for the mobilizations in restoring hip ROM. The IAOM knowledges respect to the acetabular inclination thus positioning for 3D kinematics of 30-60 degrees flexion,15-30 degrees abduction, 15 degrees external rotation for the direction of the mobilization or in pre-positioned state depending on the desired outcome to be gained (improvement of ROM or decreased pain). The author’s joint mobilizations were all performed in a flexed position whereas their functional testing encouraged more of an extension skill of the modified STAR pattern (posteromedial/posterolateral). The authors acknowledged not utilizing anterior or posterior glides according the convex-concave rule and recommended an extension technique for possible increased impact of their outcomes. The IAOM recommends a more specific mobilization approach depending on whether a capsular pattern of restriction exists, a specific 3D direction is utilized. We utilize traction or curved mobilizations both with distraction and approximation depending on the type of hip condition such as congruent/arthritic versus dysplasic/unstable. Below are examples of traction mobilization recommendations for a possible similar study utilizing the functional outcomes (Figures 5-7). Mobilizations are prepositioned and performed in specific direction (i.e., Ventral/lateral/caudal for prepositioned extension mobilization). The last Figure can utilize a belt (maintaining the integrity of the study in utilizing a belt). Curved mobilizations assist regaining hip ROM. 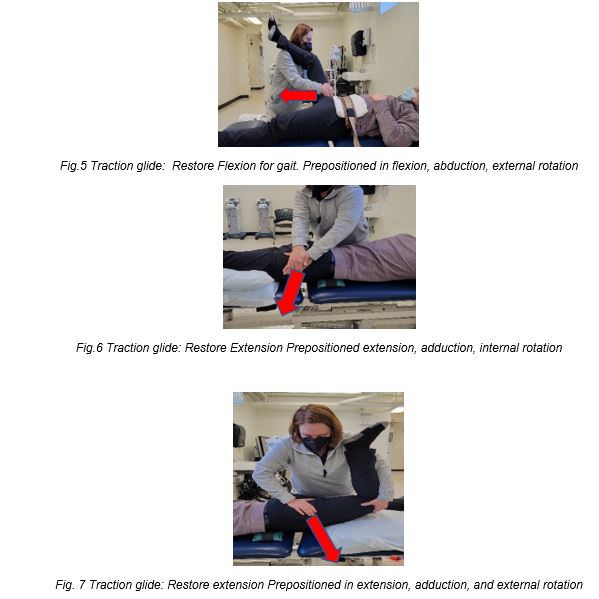