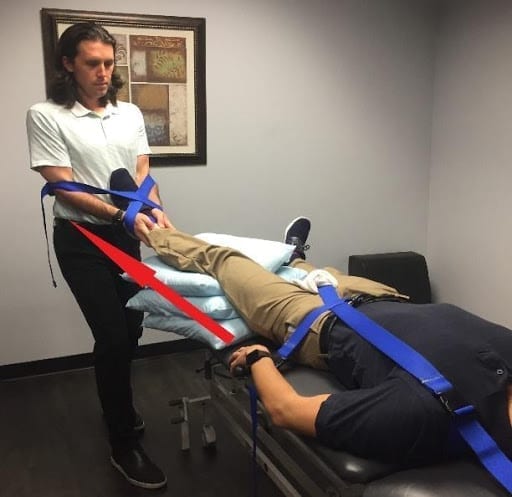 Context: Patients experiencing hip osteoarthrosis (OA) display many forms of pain and dysfunction. For patients experiencing mild to moderate OA the utilization of long-axis distraction mobilization (LADM) has been found to be beneficial. Numerous studies highlight the use of high-force high velocity low amplitude (HVLA) manipulation on hip pain; however, there is limited research determining the different amounts of force needed to achieve similar outcomes on pain and function following LADM.

Objective: The current study’s main purpose was to identify the force a therapist should deliver while performing a LADM in order to improve ROM, decrease pain, and increase function.

Patients or Other Participants: There were initially 73 chosen for the research study however, thirteen subjects were excluded due to a failure to meet inclusion criteria. The remaining 60 participants (mean age 63 ± 9.7 years; 58.3% male) were randomly assigned to either the low, medium, or high-force LADM groups. Each group included 20 subjects.

Intervention(s): The three treatment groups included the low-force (26.4 ± 6.8 N) group, the medium-force (50.7 ± 7.8 N) group, and the high-force (68.6 ± 2.9 N) group. Each group received a total of three trials of LADM on consecutive days. A force dynamometer was utilized by a qualified physical therapist to gauge the exact force performed with each LADM. The force delivered to the low-force group was performed and sustained over a 10-minute period of time. The medium- and high-force group received the LADM in an interspersed fashion over a 10-minute period of time.  During each of these interspersed periods the force was applied for 45 seconds for the medium-force LADM group and 30 seconds for the high-force LADM group. There was a rest period of 15 seconds between each set for the medium and high-force treatment groups.

Main Outcome Measure(s): The outcome measures were assessed via a qualified and blinded research participant. This was a test-retest study; therefore hip ROM (sagittal, frontal, transverse plane) was tested prior to LADM delivery and then 5 minutes after LADM procedure delivery. Hip pain was assessed via the Western Ontario and McMaster University (WOMAC) pain subscale and the 100-mm visual analog scale (VAS).

Conclusions: This article indicates that high-force LADM causes a significant improvement in hip ROM into all three planes of motion when performed over repeated trials. Additionally, WOMAC pain subscales improved with both the low-force and high-force LADM groups.

Clinical Impression: During my time as a practicing physical therapist I have based the force at which I deliver manual therapy more on the patient’s pain level and the feel of the patient’s connective tissue and less on the amount of force delivered. To gauge pain, I regularly interact with the patient and modify the force of my manual therapy techniques in response to the patient. When it comes to the performance of joint mobilizations, I mostly have performed mobilizations based on the Maitland model of treatment. In this model Maitland addresses connective tissue through a five-grade system (I-V) that integrates both soft tissue feel and oscillatory actions to achieve both pain reduction and tissue mobility improvement. The currently reviewed article however focuses on the Kaltenborn approach of addressing joint mobility and uses a 3-grade system to address connective tissue and achieve improved hip joint ROM.1 The Kaltenborn approach mainly focuses on the forces delivered to the connective tissue which apparently results in a positive improvement in connective tissue mobility and improves hip joint ROM. Maitland only describes high-force delivery when performing grade V mobilization/manipulation and with this force the mobilizations are not sustained for fear of harming the connective tissue. The Kaltenborn’s approach might be more beneficial to the treatment of minimal to moderate severity OA due to applying a more aggressive force for prolonged periods of time when compared to the Maitland approach.

Consistency of the Content: This article serves as a good reminder of the different principles utilized in physical therapy and brings to light another way in which to treat patients with hip pain and movement dysfunction. This article provides an argument that the sustained Kaltenborn joint mobilization techniques could be favored over Maitland mobilization techniques when treating a patient with minimal to moderate hip OA. 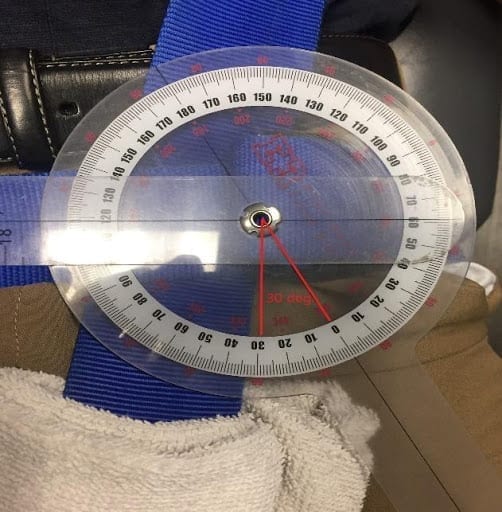 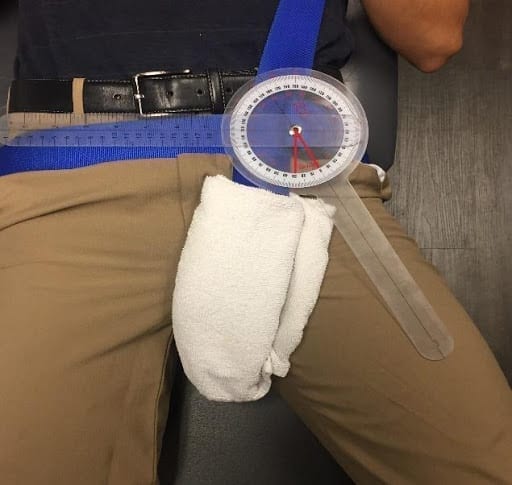 Figure 1b – The patient is placed in a supine position with the affected hip adjacent to the edge of the plinth. Two manual therapy belts are utilized to maintain pelvis stability. The first belt is placed perpendicular to the patient’s body and runs side to side under the ASIS of the pelvis and acts to hold the patient’s pelvis down on the plinth. The second belt, with padding in the groin region, is placed in a manner to stabilize the pelvis from cranial 🡨🡪caudal motion. The hip is placed into 30° of hip abduction while in this position as is indicated by the goniometer in figures 1a and 1b. 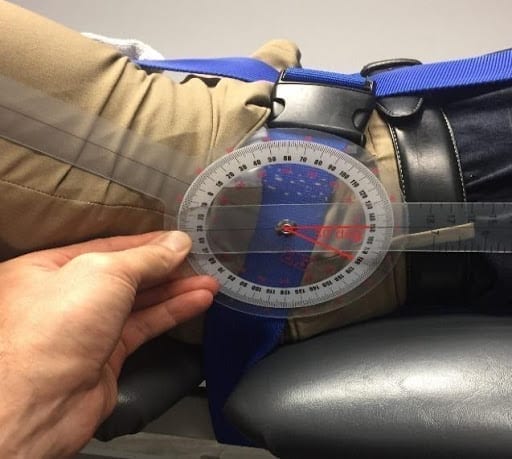 Figure 2 – The hip is maintained in the position described in Figure 1a and 1b and placed into 30° of hip flexion as is indicated by the goniometer in Figure 2. 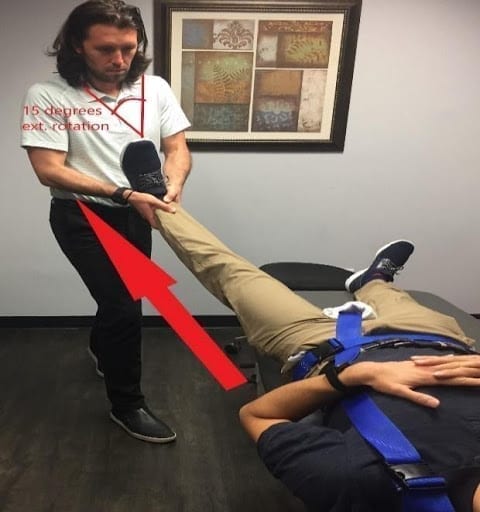 Figure 3a – To complete the loose packed positioning (resting position) the affected hip must be externally rotated 15° as well. Once all three positions of abduction, flexion, and external rotation are achieved the long-axis distraction mobilization (LADM) can be performed by have the treating therapist grab and brace the distal lower extremity while pulling the affected leg into a ventral-lateral-caudal direction in relation to the patient’s body. Please refer to Figure 3a – 3c and the arrows included for the indication of the line of force performed by the acting physical therapy when completing the hip LADM. 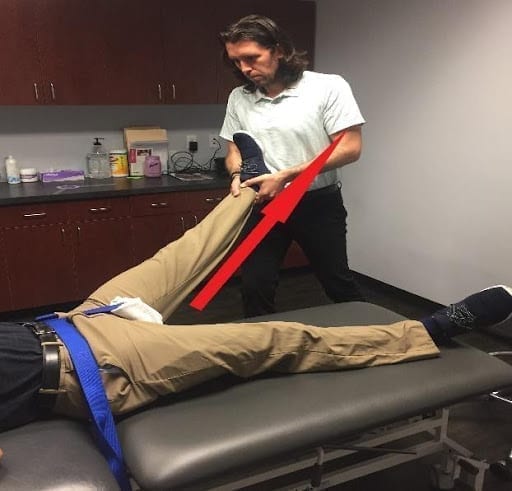 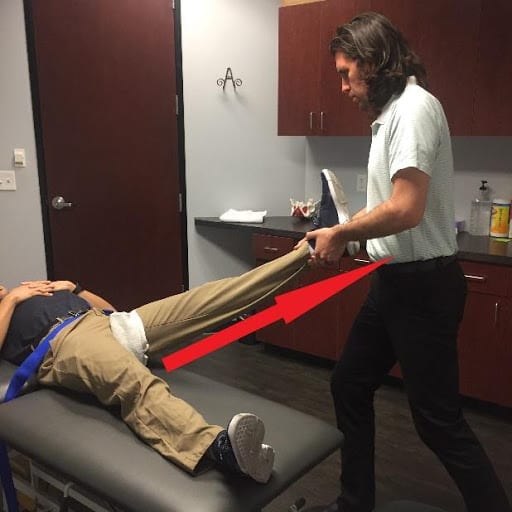 Figure 4a – An alternative method for performing the resting position joint axial separation technique incorporates patient comfort while utilizing a bolster or pillows under the patient’s leg. The therapist performs the traction mobilization as described in Figure 3a – 3c while using a manual therapy belt to improve therapist ergonomics by easing strain on the therapist’s arms. The third manual therapy belt is wrapped around the therapist’s waist and then double-looped around the patient’s distal lower extremity as is shown in Figure 4a – b. The same force is delivered as described above. 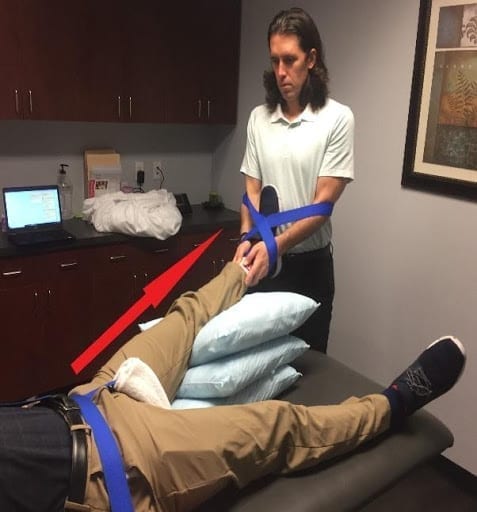 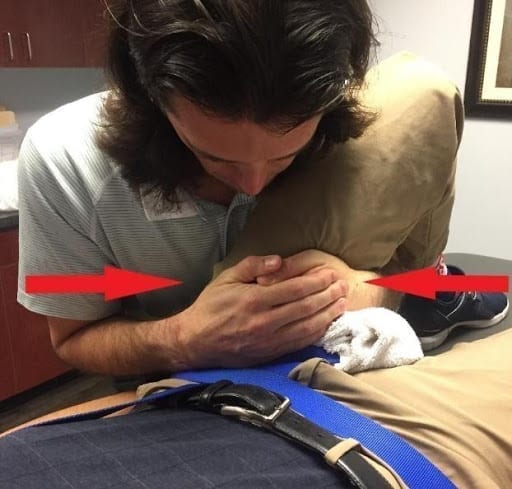 Figure 5a. In Figure 5a – b the performance of hip axial separation with preposition flexion is performed. The patient has his pelvis stabilized by two manual therapy belts as was shown in Figures 1a – b previously. The patient’s hip is pre-positioned into 45° of hip flexion with a small amount of hip abduction and internal rotation. The therapist stands distal and lateral to the patient’s affected hip in a stride stance position while facing cranial and medial. The therapist wraps his/her arms around the patient’s proximal thigh and cradles the patient’s femur with an overlapping hand position near the ipsilateral pubic bone. The therapist maintains this position and then adducts his/her arms into his body. The therapist then performs a scooping mechanism with his/her hands in a ventral-lateral-caudal direction to engage the hip connective tissue. Lastly, the therapist stands up through extending his/her knees to generate further axial separation of the patient’s hip joint. Please refer to Figure 5a – c. 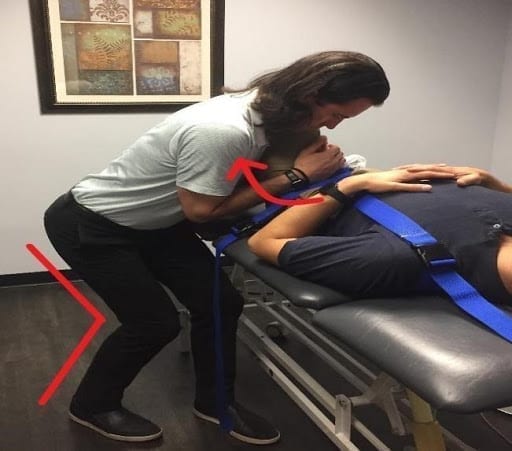 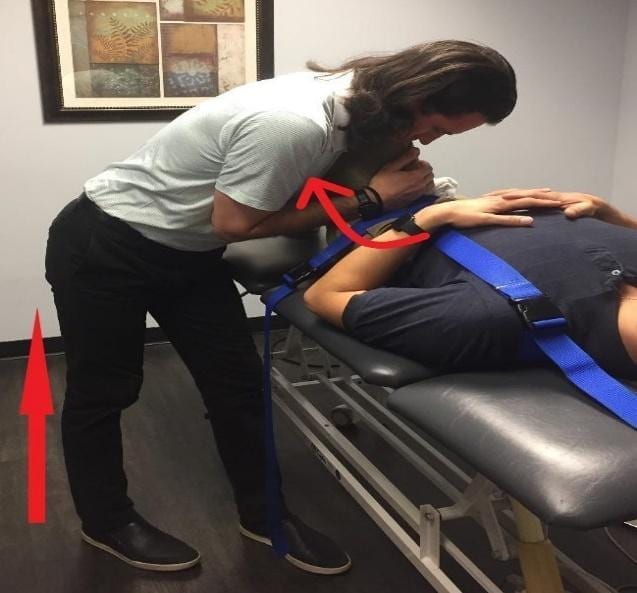 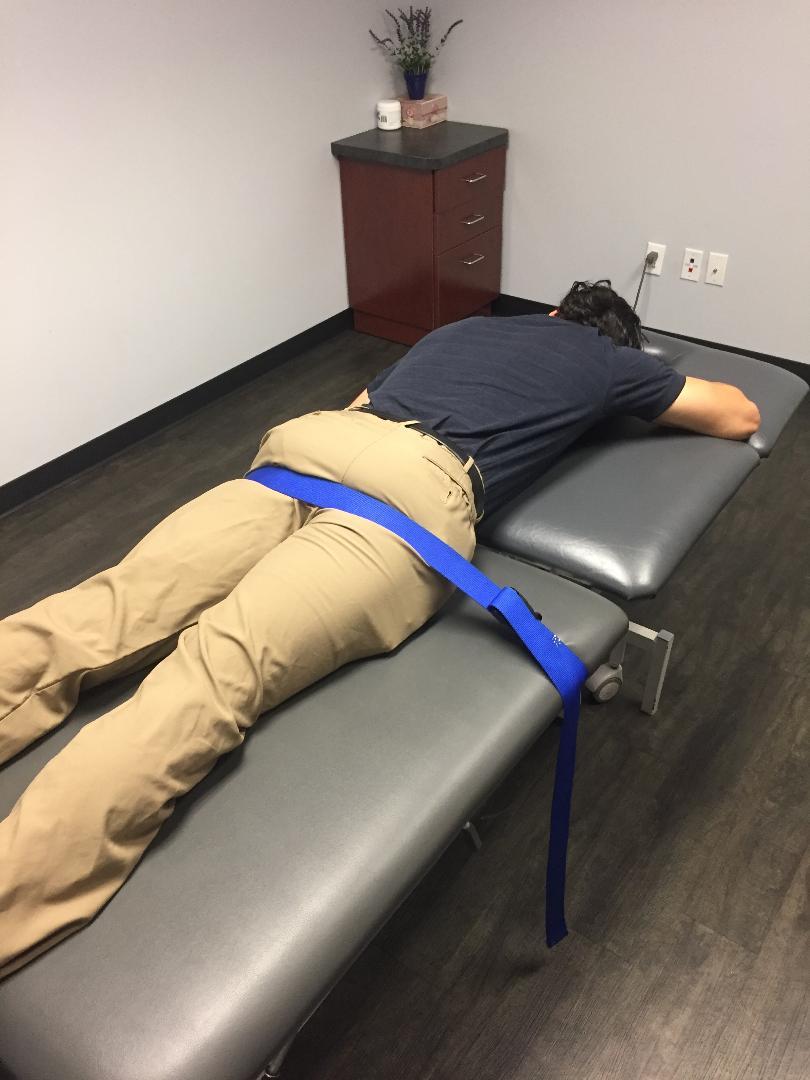 Figure 6a. In Figure 6a – c the performance of indirect prepositioned hip extension mobilization is performed with the purpose of increasing a patient’s hip extension motion. The patient has been placed in a prone position with the manual therapy belt placed at the level of the ischial tuberosities and looped under the plinth. This will help to stabilize the pelvis during the mobilization. While in this position the treating therapist grabs the distal lower extremity just proximal to the medial and lateral malleoli. While maintaining this hand position the patient’s lower extremity is taken into hip extension, abduction, and external rotation. The therapist will deliver a caudal-dorsal-lateral directed pull of the patient’s lower extremity to achieve axial separation of the hip. From this position the patient can be taken into further adduction and extension to increase the amount of hip extension. 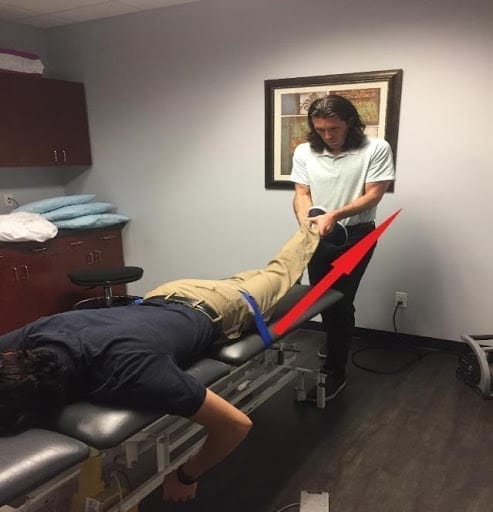