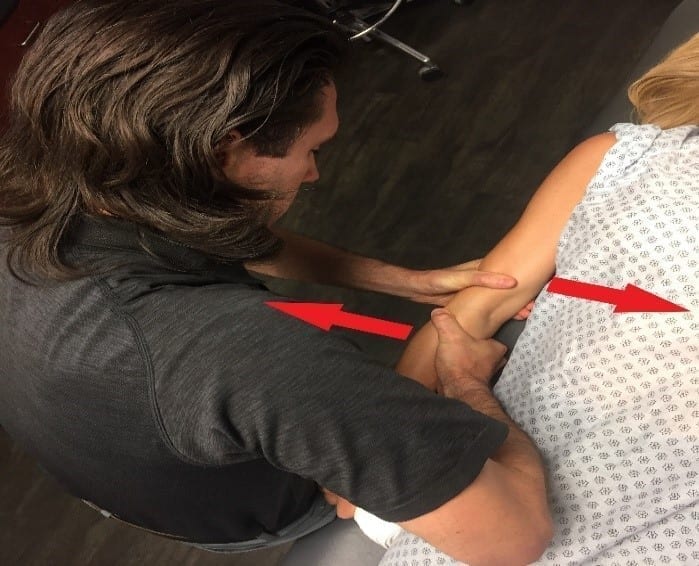 Context: Lateral elbow pain, more specifically lateral elbow tendinopathy (LET), is a commonly seen condition in the physical therapy setting. According to da Costa et al.1 there is LET incidence and prevalence of 7% and 12% in adults. The National Institute for Occupational Safety and Health2 found that LET leads to a higher rate of sick time utilization. Understanding the prevalence and frequency in society and the effect it can have on workplace productivity there was an obvious need to determine if joint mobilization techniques are both functionally and cost effective in the treatment of LET.

Objective: The objective of this recent systematic review and meta-analysis was to determine the effectiveness of physical therapy-based mobilization and manipulation techniques on pain, grip strength, and disability.

Design: The systematic review was performed using the computerized databases CINAHL, PubMed, and PEDro. The search for appropriate articles was stopped in June of 2017. The search had a preliminary parameter that only included studies that scored 5 points or greater on the 11-point Physiotherapy Evidence Database (PEDro) quality assessment scale. The review also limited patients age to 18 years and older and with patients who experienced LET specifically. The articles were to included manual mobilization and/or manipulation techniques delivered to the cervical spine, shoulder, elbow, and wrist by either a physical therapist, occupational therapist, or chiropractor. The articles selected focused on the treatment of LET with an attempt to address pain, strength deficits, and functional impairment.

Details of Paper: This systematic review and meta-analysis found 257 studies originally and determined that only 20 studies that met the necessary inclusion criteria. Of the 20 studies included 7 were given an excellent score of “1b” which indicated the study scored between a 9 and 10 on the 11-point Physiotherapy Evidence Database (PEDro) quality assessment scale. The remaining 13 studies were given a “2b” score indicating they scored between a 5 and 8, fair to good, on the 11-point Physiotherapy Evidence Database (PEDro) quality assessment scale. From the 20 studies determined satisfactory for qualitative and quantitative analysis only 7 of the studies were included in the meta-analysis.  After reviewing the studies there were numerous procedures classified as either joint mobilizations or manipulations with a specific focus on correcting LET. The researches classified these mobilization/manipulation techniques into three groups including mobilizations with movement (MWM), Mill’s manipulation, and regional mobilizations. The Mill’s manipulation technique was found to be present in 5 studies with 438 subjects represented for all of the studies represented. The11-point Physiotherapy Evidence Database (PEDro) quality assessment scale found quality ratings ranging from 7 to 11 with a range 8.6.

Main Outcome Measure(s): The age range of participants included in the chosen studies ranged from 37 to 54 years. The main outcome measures were pooled together as a result of frequency of appearance in chosen articles. Pain was determined via the Visual Analog Scale (VAS) and based on resting values and pain free or maximal grip strength values.  Disability was assessed through self-reported functional outcome tools and these tools varied between studies selected for inclusion in the study The MWM technique was identified and utilized in 8 studies with a total participant sample size of 551 participants. The average amount of time each participant had experienced LET ranged from 15 days to 36 months. The MWM technique was performed with a pain-free gripping activity for 6 repetitions followed by a 15-second rest break between each of the repetitions. Each of these 8 studies received a PEDro quality assessment score of 5-10 with an average score of 7. In order to assess the effectiveness of MWM the technique was compared to other experimental procedures which included exercises, taping, ultrasound, and cortisone injections. When determining pain via the VAS and comparing the results in the short term (<3 months), intermediate term (3-6 months), and long term (6-12 months) there was a finding of moderate positive effect (0.43 [95% confidence interval {CI}: 0.15-0.71]) for MWM on improvement in pain in 4 studies that met qualifications for data extraction. Grip strength data was extracted from two articles that met inclusion criteria and included a short term only (<3 months) time period. From this time period it was determined that MWM showed a moderate positive effect (0.31 [95% CI: 0.11-0.51]) on improving grip strength. Specifically, Kochar et al.3 found a mean increase (7.78 kg at 3 weeks and 8.83 kg at 12 weeks) in grip strength when compared to the baseline values and these same findings were found to be significant within-group at each time period tested. Studies generally failed to examine the immediate effects of MWM on function.

This review also investigated regional mobilizations that were described in much less detail. The researchers found 7 studies that compared ventral scaphoid manipulation with a total of 38 participants present in the studies.  A corrective radial bone manipulation (n = 16) was also assessed at the wrist and hand in another study. There were four studies found that investigated 3 different types of cervical spine mobilization and these studies included rotational high velocity thrust manipulation to the C5/6 segments (n = 18), grade 3 slide glides to the C5/6 segment (n = 15), and grade III and IV mobilization to cervical and thoracic spine segments (n = 10) that were previously found dysfunctional on physical evaluation. For all studies the mean age ranged from 40.4 – 47.5 years of age. Positive effects on pain due to LET were found in only two studies and both studies focused on ventral scaphoid manipulation only. When ventral scaphoid manipulations were assessed in the short term (3 and 6 weeks) they resulted in a positive mean difference (reduction in pain) of 2.4 and 5.2 (SD = +2.4) in pain when measured with the VAS and comparing pre and post-manipulation pain values. The effect regional mobilization/manipulations had on grip strength resulted in a uniform success in the short term and in one study with a medium term of follow up there was a resulting improvement in grip strength. The mean difference in the short term was found to be 14.6kg [95% CI:9.3 – 9.9] while the medium-term value was found to be 19.6kg [95%CI: 1.6-37.6]. Lastly, the region effects of joint mobilization on function indicated that there was improvement in function in the short term when the self-report of inconvenience during activities form, functional ability on a VAS, and the disability of the arm, shoulder, and hand form were utilized. In the long term (6 months) there continued positive gains in all forms excluding the disability of the arm, shoulder, and hand questionnaire.

Application: The utilization of the MWM and the Mill’s manipulation has been found in the immediate, short, and intermediate terms to possess a moderate positive effect on both pain and grip strength. The application of both techniques varies in particular for the MWM group. There was indication that the most common parameter was 3 times per week for four weeks in order to obtain the pain and grip strength abilities. With the Mill’s manipulation it was found that 3 times per week for 4 weeks was beneficial. When utilizing the MWM and Mill’s manipulation the moderate positive effects are enhanced when used in conjunction with strengthening exercises. There was a finding of positive association of cervical mobilizations and both scaphoid and radial bone manipulation in the treatment of LET; however, the research based at the cervical and thoracic spine lacked heterogeneity of populations, research design, and outcome measures and also lacked adequate sample sizes and failed to utilize inferential statistics. There is a continued need to study the effect of cervical and thoracic spine mobilizations and the effect on LET. The same can be said for the utilization of scaphoid and radius mobilizations with continued and appropriate statistical analysis necessary to make clear clinical judgments.

Conclusions: The utilization of MWM at the elbow are moderately effective across numerous time frames in the reduction of LET pain. The same can be said in the short term for grip strength when the performance of MWM is done in those with LET. The Mill’s manipulation was found to improve pain across numerous timeframes as well showing a positive moderate effect like the MWM. There was however no improvement in grip strength. Lastly, regional mobilizations including ventral scaphoid manipulations resulted in a positive effect on pain in the short term only.

Refer to the Figures in the text.

Clinical Impression: This article highlights the fact that there is obvious value in the performance of MWM and Mill’s manipulation in the treatment of LET. The presence of a moderate positive effect on pain and grip strength in the immediate term, short term, and intermediate term strongly supports the reason why these mobilizations should be performed on patients with LET. There is a possible indication for the immediate performance of these techniques in those presenting to a clinic with LET. Waiting to perform the MWM and Mill’s techniques might delay a reduction in both pain and grip strength gains one might experience with the performance of the mobilization and manipulation.

Consistency of the Content: I was taught that the Mill’s manipulation was beneficial for treatment of LET pain especially when experienced at the insertion of the extensor carpi radialis brevis at the lateral epicondyle. This article is more inclusive of the entire musculotendinous unit and does not isolate it’s focus of the manipulation at the ECRB alone. It however includes the entire dorsal wrist extensor group (extensor carpi radialis longus, extensor digitorum communicans, and extensor carpi ulnaris) into the discussion. It makes better sense to generalize the entire muscle/tendon unit as it would be difficult to isolate one specific muscle with this technique. I was aware of the performance of MWM as I have read Manual Therapy: Nags, Snags, MWMs etc. by Brian R. Mulligan.6 I was unaware of the recent meta-analysis that proved its effectiveness in the treatment of LET especially as it pertains to pain and grip strength. 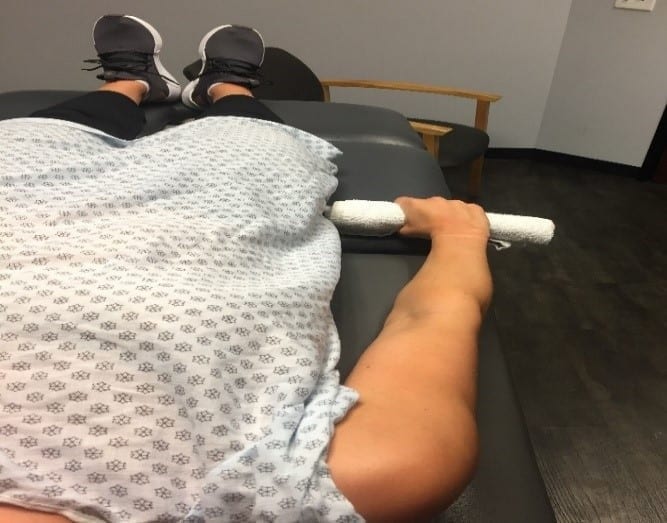 Starting position for the humeroulnar joint lateral glide mobilization with active gripping of towel or pillow case.  The patient is placed in a supine position with the elbow fully extended and the forearm pronated. The patient’s humerus is in a position that allows the medial and lateral epicondyle to maintain a parallel position to the plinth. 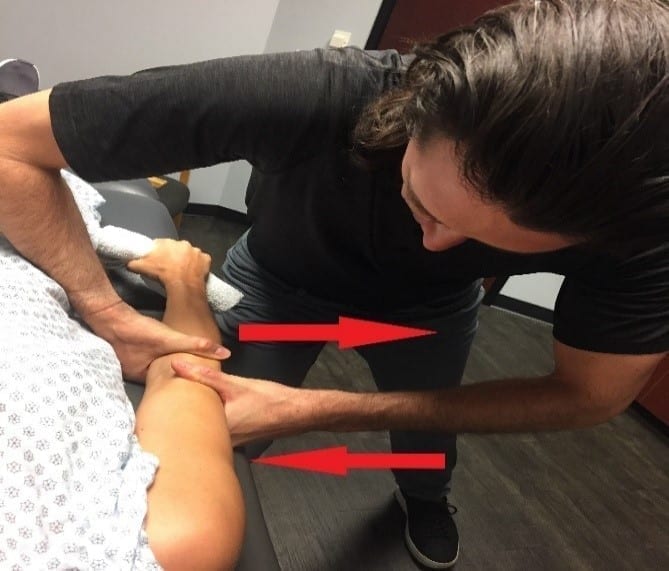 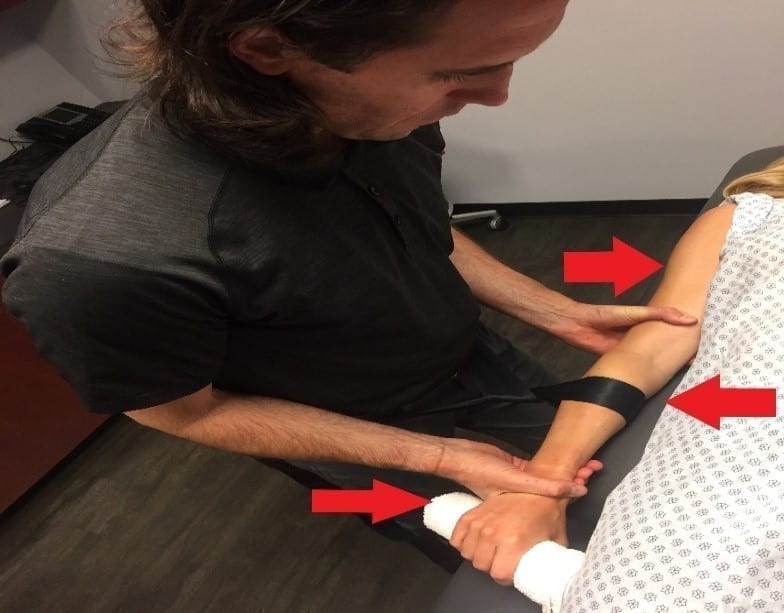 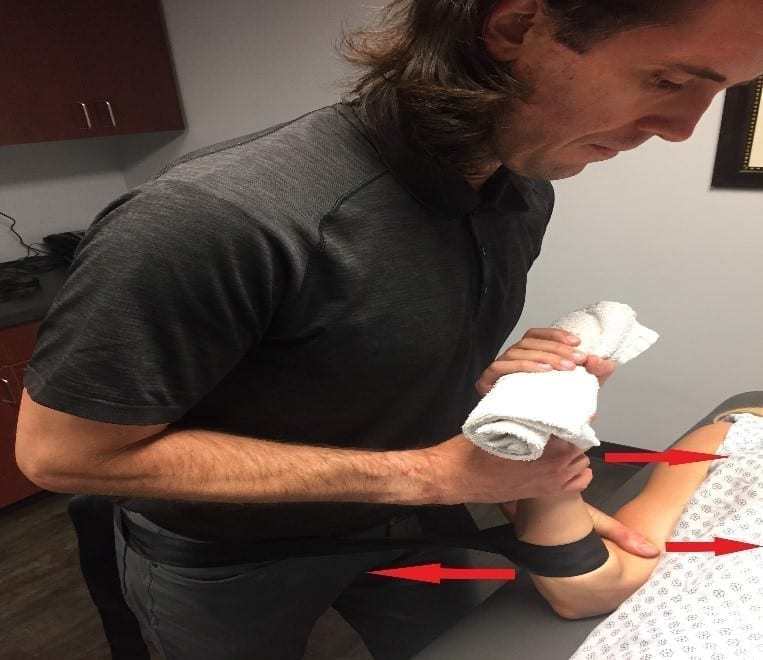 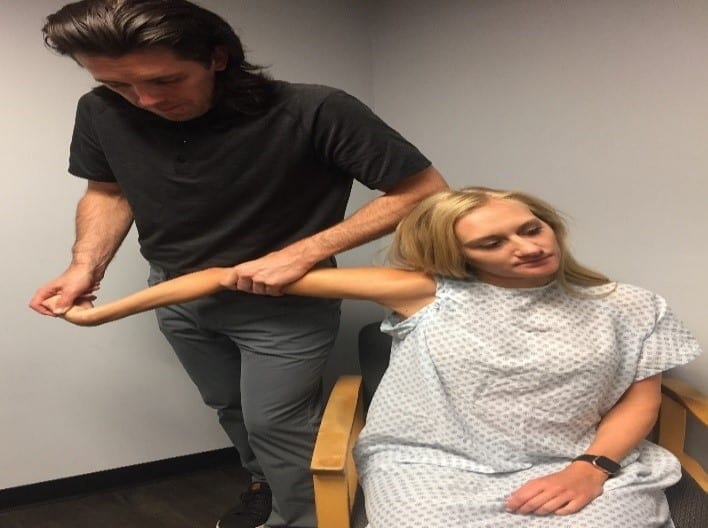 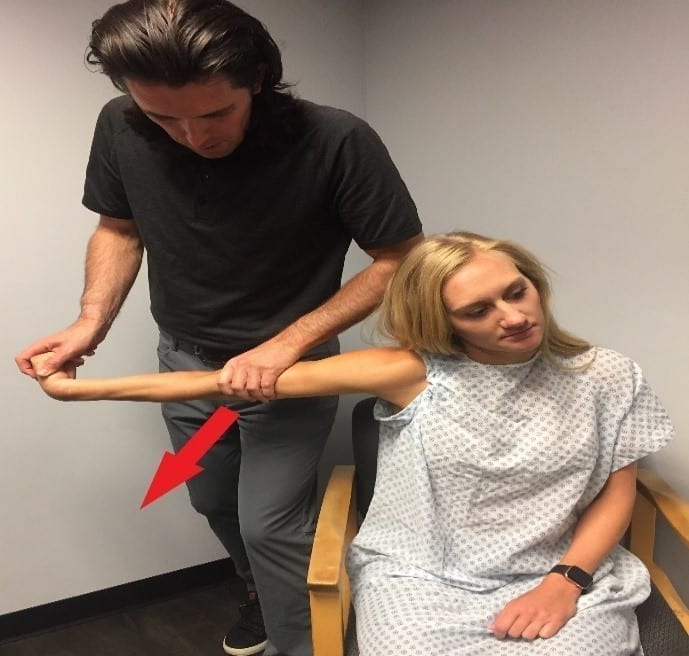