Kinematics of fast cervical rotations in persons with chronic neck pain: a cross-sectional and reliability study 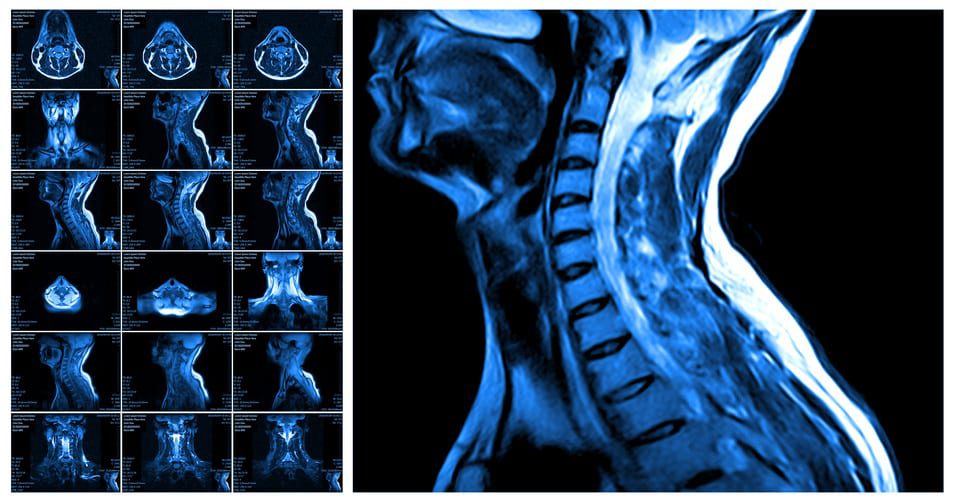 While sensorimotor deficits have been demonstrated in chronic neck sufferers in a number of metrics, most investigations have measured self-paced or slow movements.  Two studies have investigated maximum speed, but neither has looked at test-retest reliability or attempted to link them to symptoms or self-rated function.  The purpose of this study was to assess kinematics and reliability in women with chronic neck pain during maximum speed neck rotation and to link results to patient-report characteristics.  The authors used a combined cross-sectional and test-retest design, conducted at a musculoskeletal research lab in Sweden.  They recruited two samples. The first being 16 women (aged 20-55) with non-traumatic, non-specific neck pain (NS) of at least 3 months duration along with 16 controls (CON) from local advertisement.  The second group of 120 NS and 33 CON subjects (aged 20-65) were recruited from health care entities. The age of NS was a mean of 4.5 years higher than CON, and were controlled for in the analysis.   Excluded were those with neurologic, vestibular, radicular or psychiatric disorders   Kinematic data was gathered from FASTRAK, an electromagnetic system, with a receiver place on the forehead and spinous process of T2, measuring speed and along with range of motion (ROM).  Subjects were instructed to outwardly rotate their necks as quickly as possible in a seated position, right and left, alternating directions for a total of 6 trials. Sample 2 used a numerical rating scale (NRS), while Sample 1 used VAS to measure pain prior to and after testing was completed.  Questionnaires, used to assess correlation with kinematic measurements, included Short Form Health Survey, Neck Disability Index, and Tampa Scale of Kinesiophobia   As a majority of patients had bilateral or central neck pain, trials from each direction were pooled for analysis.  Intraclass correlation coefficients (ICC) were used to calculate reliability in Sample 1.  Reliability proved to be high for Peak Speed and ROM in both groups with ICC ranging from 0.64 to 0.86.    Partial Least Squares regression was used to analyze self-rated characteristics with kinematics and group significance was set below 0.05.  NS group had decreased Peak Speed compared with CON (P=<0.01) but greater than those with concurrent LBP (P=0,024).  Linear discriminant analyses was used calculate Sensitivity and Specificity to predict NS and CON.  Peak Speed and ROM had Sensitivities of 74.6% and 64.4%, and Specificities of 73.5% and 71.4% respectively.  Mean pain ratings for the NS group was 4.4 before and 4.7 immediately after the test in Sample 2 (P=<0.01).  Associated variables predicted decreased Peak Speed in the NS group were strongest for Car Driving and Running  (-.37 and -.35, respectively).  The authors concluded that fast rotation speed was most negatively affected by NS and that those differences were heightened in those with concurrent lower back pain. The authors urged further research to examine this phenomenon.

There is a lot of face validity to speed and range of motion deficits being associated with chronic neck pain. And while the speed tests are interesting, I don’t have a way to measure it in everyday clinic practice.  I would like to see a study done where chronic neck patients undergo PT, demonstrate a clinically meaningful difference in pain, and find out whether peak speed improves.  The two items of particular interest to me were the association of particularly worsened performance with concurrent lower back pain and the association of running and driving a car ability being negatively associated with chronic neck pain.  Looking back to my experience in the Neuroscience course, this just screams sensitization.  What they didn’t say was whether the lower back pain with chronic as well, though I assume it was.  It would be interesting to see if concurrent chronic lateral epicondylitis had the same effect.  The point of course being that central sensitization is a condition to be co-managed when treating chronic neck pain when at all possible.  Using thoracic spine mobility, such as a foam roller should help.  Teaching ADIM for those with recurrent lower back pain can be a valid use of clinical time, as local (neck) performance is affected.  Teaching strategies to mitigate the driving and running difficulties (where needed) should be addressed and can be improved, even if the neck pain is slow to improve.