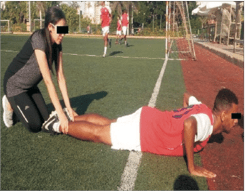 Research: The purpose of this research was to evaluate the effects of Nordic exercise onion decreasing hamstring injury likelihood, recurrence, and severity in soccer players.

Method: This randomly controlled study included 34 male professional soccer players ages 21-35 years old randomly assigned to two groups (17 players each). In group one, Nordic hamstring exercise (NHE) was performed pre-training and post-training. For group two, NHE was performed only pre-training. The control group was the same team during the previous season. The trial was 12 weeks long and the Australian football association injury form was used to collect the incidence of injuries for subjects in both groups.

Conclusions: The use of NHE as a prevention protocol was effective in reducing all hamstring injuries with the use of NHE during pre- and post-training having the greatest effect.

IAOM-US comments: Hamstring injury is one of the most common injuries in sports, particularly those requiring sprinting and kicking such as soccer, football, and rugby1.  Hamstring injuries also have a high likelihood of recurrence highlighting the need for improved rehabilitation and prevention strategies. Studies have shown that the likely mechanism for hamstring injury is due to eccentric contraction of the muscle typically experienced in late swing and stance phase. Hamstring injuries can be graded based on the severity of the injury; Grade 1: mild strain injury with minimum tear of the musculotendinous unit, Grade 2: moderate strain injury with a partial tear of musculotendinous unit and significant functional limitations, and Grade 3: severe strain injury with a complete rupture of the musculotendinous unit associated with severe functional disability1. Multiple risk factors have been proposed for hamstring injury, including shortened optimal muscle length, poor flexibility, hamstring strength imbalance, fatigue, and insufficient warm-up. Eccentric hamstring exercises have gained interest in the treatment and prevention of hamstring injury2. Hamstring injuries tend to occur closer to the end of each half suggesting they are more likely to occur while in a fatigued state. The Nordic hamstring exercise (NHE) has been proposed to decrease hamstring injuries by as much as 51% in soccer players per 1,000 hours of exposure.  By increasing muscle activity and resulting in a shift in optimum torque production towards longer lengths, including the NHE in a pre-training program can promote an ‘injury-protective’ effect. Performance of the NHE as part of a post-training program is purported to enhance the exercises’ prophylactic benefits since it would be performed in a fatigued state.  The IAOM supports the use of the NHE as a means of prevention as well as in the post-acute rehabilitation of hamstring injuries.