Recovery From a First-Time Lateral Ankle Sprain and the Predictors of Chronic Ankle Instability: A Prospective Cohort Analysis 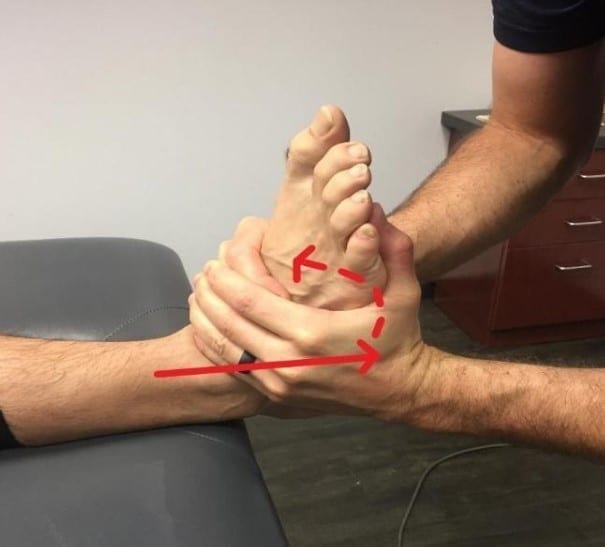 The purpose for this review is to determine the window of treatment opportunity post intervention in patients with chronic ankle instability and to compare mobilization with movement (MWM), manipulation, and a placebo group.

The researchers utilized 52 participants and randomly selected 18 patients to use MWM, 19 for manipulation, and 15 in the placebo group. The inclusion criteria included past history of at least one unilateral ankle sprain which needed weight-bearing rest, current episodes of ankle instability in the form of giving way, pain and/or subjective decrease of function, less than 24 points in the Spanish version of the Cumberland Ankle Instability Tool. Exclusion criteria were lower extremity injury or surgery within the past six months or physical therapy treatment of the lower extremities at the time of the study.

The researchers were measuring weight bearing ankle dorsiflexion as their outcome and performed a lunge with the foot planted on the ground and the knee brought closer to the wall. The distance was measured when the ankle was in full dorsiflexion with the heal on the ground and the knee touching the wall, the distance between the second digit and the wall was measured. This measuring technique showed to have a high intra-rater reliability. Dorsiflexion was assessed before intervention, immediately after intervention, and again 10 minutes, 24 hours, and 48 hours after the intervention.

The MWM was administered with the subject standing. A nonelastic belt passed around the distal leg and the physical therapist’s pelvis who was positioned in front of the patient. The therapist applied a sustained posteroanterior glide to the tibia through the belt by leaning backwards while the talus and forefoot were fixed with the space between the thumb and the second finger of the right hand. The participant was instructed to perform a slow dorsiflexion movement until the first onset of pain or end of range of motion without the heel lifting up. 10 repetitions were performed in one set. The talocrural joint high velocity, low amplitude (HVLA) manipulation was applied with the participant lying supine. The therapist grasped the foot of the participant with one hand with his fifth finger contacting the anterior aspect of the ankle at the talus. The other hand of the therapist reinforced these contact points. Both thumbs of the therapist were placed on the sole of the foot. The therapist brought the patient into full dorsiflexion and the thrust was applied as a distraction technique. Three thrusts were applied in one set. The placebo condition replicated the MVM condition with some exceptions. The belt was placed around the calcaneus in weight bearing and the therapist only applied enough pressure to reduce the slack in the belt. One hand remained on the proximal tibia, while the other was positioned across the base of the metatarsals. The patient performed 10 repetitions as one set.

There were no significant differences between groups before intervention. There was a significant increase of ankle dorsiflexion in both the MVM and HVLA groups with respect to the placebo group but no differences between the MVM and HVLA groups. Both techniques utilized in this study maintained dorsiflexion for two days, therefore manual techniques do not need to be applied daily, but can be spread at least two days.

This article provides evidence that allows for a treatment window in treating patients with chronic ankle instability. Doherty et al explains that the first occurrence of lateral ankle sprain is a potential gateway to a sequela of chronic symptoms in the following year. This gateway is established by “articular deafferentiation” at the ankle joint. Wikstom and colleagues noted that lateral ankle sprains are the most common injury sustained during physical activity and account for 22% of all sports injuries. Furthermore, about 30% of those who incur a first-time lateral ankle sprain develop chronic ankle instability. The ankle is a very complex joint and can lead to many deficits up the chain, so it is important to find out through subjective examination if a patient has a history of ankle sprains to help guide our treatment of not only ankle injuries, but injuries throughout the lower extremity including the hip and the knee. A patient may not realize their limitations in dorsiflexion until we compare the involved side to the uninvolved side. After reviewing this article comparing MWM, manipulations, and the placebo treatment, we now know that dorsiflexion can be increased in patients with chronic ankle instability for a time frame of two days, at minimum. If we can increase dorsiflexion for that amount of time, we can provide exercises to improve stability and proper afferent input to the ankle joint in attempts to reverse their ankle instability.