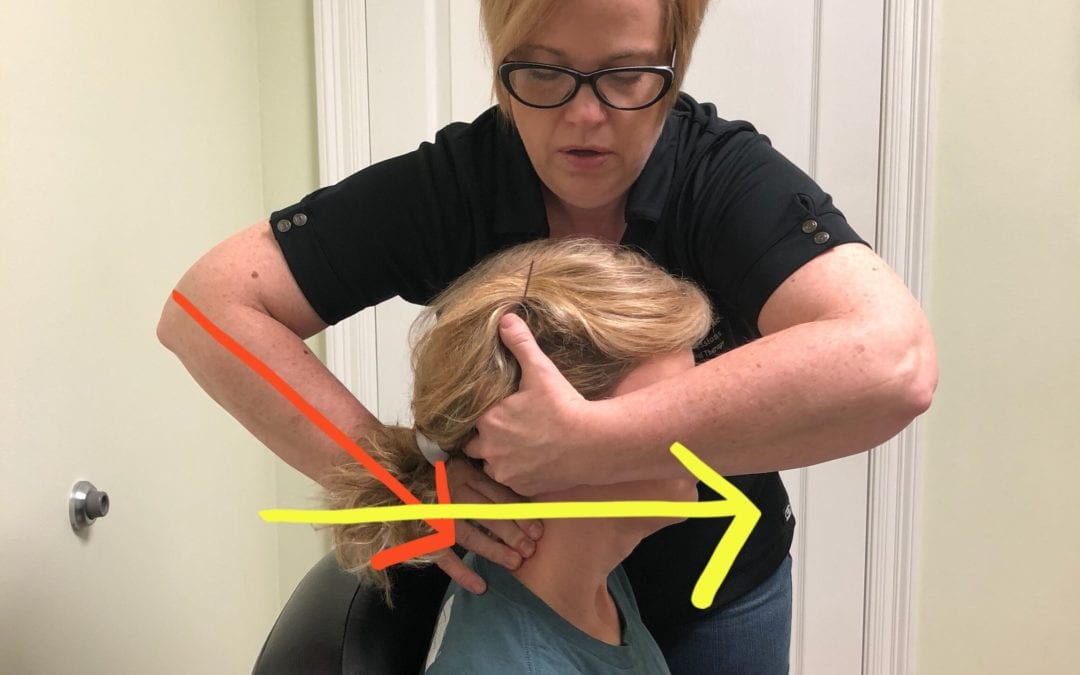 Rheumatoid arthritis (RA) is a disease that affects over 2 million people in the United States.1  Bony erosion and ligament laxity are a common problem within the advancement of the RA disease process.  Interestingly, the first place that this inflammatory destruction begins in the spine is in the upper cervical area during the early course of the disease.2  Instability at the atlantoaxial junction is the most common form of cervical dysfunction that occurs.1 This area contains highly sensitive neurological structures that are protected by ligaments, which can become lax due to the RA disease process.  Many studies investigated the upper cervical spine and the ligament structures.3,4,5,6  Other studies have looked at the definition of instability determined by both the AADI (anterior atlantodental interval, Figure 1) and the PADI (posterior atlantodental interval, Figure 1).  The AADI, defined as the distance between posterior bony aspect of the anterior arch of the atlas to the anterior bony aspect of the dens,7 has normal values of <3 mm in males and <2.5 mm in females on CT as well as <5 mm in children.5  The AADI on radiography is considered normal at <3 mm in both males and females.8 The PADI, defined as the distance between the posterior bony aspect of the dens and the anterior bony aspect of the posterior ring of the atlas,9 has normal values of 19-27 mm where a PADI of less than 13 mm is associated with severe stenosis.10  According to Boden et al, a PADI of less than 14 mm had an increased risk of neurological deficits.11

This study was performed to determine the stabilizing values of the upper cervical ligaments in order to evaluate their contribution to protection of the neurological structures in this area.  Ten frozen specimens with an average age of 84.6 years old were analyzed from C0 – T1. It was determined that 30N of force was needed to perform normal, age-related ROM (40˚ of flexion to 50˚ of extension).  Testing was performed moving from flexion to extension 3 times prior to beginning the experiment to decrease any viscoelastic properties that could cause bias.  The specimens were then moved in 3 different phases:  (1) Flexion/extension performed with intact ligaments, (2) flexion/extension after the transverse ligament (figure 2) was resected, (3) flexion/extension after the alar ligament (figure 2) was resected.  Sagittal fluoroscopy was performed capturing images in end-range flexion and extension as well as neutral position. 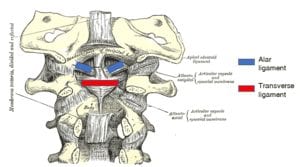 Table 1:  Changes in AADI and PADI in neutral, flexion and extension with intact ligaments and after transverse and alar ligaments have been cut.

*** Indicates a significant change (p = 0.04 in comparison to the just the TLA being resected)

This study supports previous findings indicating that the position of the odontoid process is related to the laxity of both the TLA and alar ligaments.  Rheumatoid arthritis can cause ligamentous laxity and bony instability due to the inflammation process and destructive synovitis, which can lead to laxity and bony erosions.12  The potential for ligamentous laxity should be considered when treating the RA population.

IAOM Commentary: Treating patients with RA should be approached cautiously.  It has been reported that the risk factors for increasing instability and neurologic deficits in the RA population are higher in males versus females.13  Other non-radiological risk factors are prolonged use of corticosteroids, severe peripheral joint changes and a positive rheumatoid factor.12  Attention to detail with the questioning and patient history taking is imperative as health care providers assess this population.  Does the patient’s ligamentous laxity correlate with other red flags such as neurological deficits, increased deep tendon reflexes, severe pain, blurred vision and gait disturbances?14  Does the patient present with neurological deficits in addition to other testing.  Sizer et al suggested placing patients in one of three different categories according to their individual red flags.14  Category I requires the patient to be referred back to the physician.  This category would include the patient with cord compression (bowel/bladder changes, saddle anesthesia etc) as well as those who need imaging according to the NEXUS or the Canadian Cervical Spine Rules.  Category II requires further questioning, testing and cautious treatment and watchful waiting.15  The RA population would be considered in this category with the assessing of the transverse and alar ligaments without neurological deficits.  Category III requires extra testing clinically and clinical reasoning to further identify the patient’s pain generator.

The alar and transverse ligaments should be tested prior to cervical spine treatment in order to clinically assess stability in this sensitive area.3,16  Selected studies analyzed the location of these upper cervical ligaments and researchers have gained an understanding of the stresses that occur with stretching.  Given their understanding of the constraints that intact upper cervical ligaments provide, investigators have been able to speculate the best way to assess the stability in the structural system.316,17  Although the clinical tests that Physical Therapists utilize have not been validated, testing has been done to validate that sidebending and rotation testing indeed stretches the contralateral alar ligament.3  We know that the alar ligament limits upper cervical rotation as well as sidebending and it is stressed with a rotated and flexed position.3,16,17

Anatomical anomalies are commonplace and patients may present with upper cervical ligaments of varying length.  Aspinall suggests testing the alar ligament in all positions (neutral, flexion as well as extension) to assess laxity in all positions.16   The IAOM recommends a seated position for testing as the coupling patterns in the cervical spine provide the most stability when the patient is placed in a position where the articulating surfaces are against gravity.18  To assess the alar ligament, the patient is in a seated position where the C2 segment is stabilized, followed by an axial distraction through the occiput in order to tighten up any slack in the ligamentous system.  The head is then sidebent away from the examiner while there is remaining pressure on the lamina of the C2 spinous process closest to the examiner.  If the ligamentous system is intact, there should be no sidebending that occurs or a harder end-feel when applying pressure onto the C2 lamina (Figure 3).14

The transverse ligament can be assessed with both a sidegliding motion as well as a ventral glide.  The therapist stabilizes the C2 segment and perform a ventral glide with the occiput and C1(figure 4A).  The therapist continues to stabilize the C2 segment while the examiner grasps the occiput and performs a sideglide of the occiput and C1 towards the clinician (figure 4B).  A test is considered positive with a reproduction of patient’s symptoms.14 One recognizes that the transverse ligament maintains the integrity of the dens and if there is a decrease in the PADI to <14 mm there is a higher risk of cord compression and symptoms.5.8 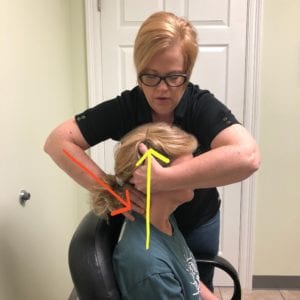 Figure 3:  Alar Ligament Testing:  C2 segment is stabilized in a ventral-caudal direction.  The examiner then performs an axial distraction through the occiput in order to tighten up the alar ligaments.  The head is then sidebent away from the examiner while there is remaining pressure on the side of the C2 lamina closest to the examiner.  No movement of the spinous process should occur if the ligaments are intact. 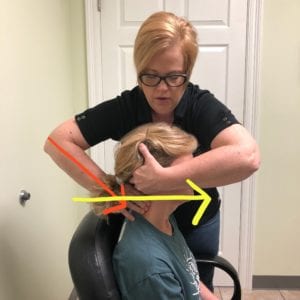 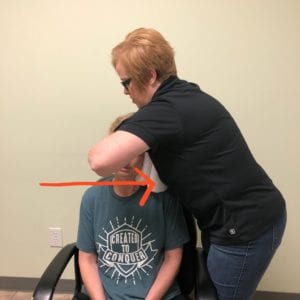 Figure 4:  Transverse Ligament Testing.  A.  Stabilize the C2 segment with a ventral-caudal stabilization.  The therapist then performs a ventral glide with the occiput and C1.  B. Stabilize the C2 segment as before and the therapist performs a sideglide of the occiput and C1 towards the clinician. A positive test is one in which the patient’s symptoms are reproduced.

As Physical Therapists become the first line of defense in a patient’s medical treatment, they should be mindful of changes that are occurring in our patient’s bodies, seen and unseen to ensure their utmost safety during treatment.  A patient with an alar ligament tear could present with severe neck pain, muscle spasms, dizziness, and tinnitus.16,19,20  A patient with transverse ligament disruption can present with cord symptoms, neurological deficits, gait disturbances and possible difficulty with swallowing.9,16  We should correlate patient’s symptoms and clinical findings as well as watchful waiting, as suggested by Cook et al.15   Good communication with the patient and their entire medical team is imperative in assisting our patients towards recovery as well as seeking further examination for conditions that may be outside our scope of practice.