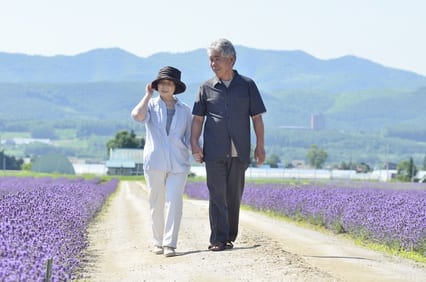 The purpose of this parallel group, single-blinded, randomized controlled study was to investigate the effects of walk training combined with restricted blood flow to leg musculature, known as KAATSU training, on muscular size and strength, functional ability, and aerobic capacity in older participants. Nineteen men and women, aged 60 to 78 years, volunteered to participate in the study. Participants were randomized into either a KAATSU-walk training group (2 men and 9 women; n = 11) or a non-exercising control group (2 men and 6 women; n = 8). All participants in this study were physically active and most of them walked daily for exercise. Participants in the control group continued their daily physical activity, but no additional exercise routine was imposed by the investigators. The KAATSU-walk group performed 20-minute treadmill walking (67 m/min), 5 days/wk for 6 weeks.

The authors of this study required participants to fill out a medical history questionnaire and participate in a health interview conducted by a physician before being accepted into the study to ensure that there were no existing health risks. Exclusion criteria for this study included history of any cardiovascular disease, diabetes, cancer, orthopedic disorders, deep vein thrombosis, or peripheral vascular disease. None of the participants in this study had participated in strengthen or resistance-type training for a minimum of 2 years prior to the start of the study.

In order to measure and record skeletal muscle mass (SMM), the authors of this study used the combination of derived equations to account for the muscle-bone cross-sectional area and the use of an ultrasound to measure muscle thickness for the mid thigh and 30% of the proximal lower leg. The muscle thickness was converted into kilograms by the use of the derived equations, which were then used to calculate the segmental skeletal mass of the lower extremities. Strong correlations, ranging from r = 0.83 to r = 0.96, were observed between the measured and the predicted SMM for total and all regional segments of the SMM. The standard error of estimates for the various predicted SMMs ranged from 0.6 kg to 1.8 kg. This measurement was completed at baseline and 3 days after the final training.

Maximum voluntary isometric and isokinetic knee flexion and extension contractions were used as the measure of muscular strength. These measurements were determined by using a Biodex System-3 dynamometer. The study participants were able to familiarize themselves with the Biodex and the testing 1 week before the testing. Several warm-up contractions were performed before testing. Participants were then instructed to perform maximal isometric knee extension at a fixed knee joint angle of 75°, followed by maximal isokinetic knee extensions and flexions between 0° and 90° at 3 different testing speeds (30°/s, 90°/s, and 180°/s). A knee joint angle of 0° corresponded to full extension of the knee. The test was assessed at baseline and 3 days after the final walk-training session.

In order to measure aerobic capacity, oxygen uptake was measured before and after the training program by using an automated breath-by-breath mass spectrometry system. Participants warmed up at 60 m/min on a 0% grade for 3 minutes. Then, the treadmill speed was held constant while the grade was increased by 1.8% every 2 minutes until participants reached approximately 80% of their age-predicted maximum HR (220 − age). Each participant’s electrocardiogram was monitored constantly during the exercise session, and was used to measure HR at intervals of 60 seconds. Ratings of perceived exertion were also recorded every 2 minutes during exercise. V̇O2peak was estimated by fitting the age-predicted maximum HR value into the linear regression equation computed from the individual V̇O2 and HR values during graded exercise.

The Timed Up and Go and the Sit to Stand tests (participants stand up for seated position as many times as possible in 30 seconds) were used to asses the participants functional abilities. Scores were recorded before and after training program.

At the baseline measurements, there was no significant differences in any categories. The results of the study showed improvements in the experimental group for isometric (11%) and isokinetic (7%-16%) knee extension and flexion torques, muscle-bone cross-sectional area (5.8% and 5.1% for thigh and lower leg, respectively), and ultrasound-estimated skeletal muscle mass (6.0% and 10.7% for total and thigh, respectively) increased (P < .05) in the K-walk group but not in the control group. Functional ability also increased significantly only in the K-walk group (P < .05); however, there was no change in the estimated peak oxygen uptake (absolute and relative to body mass) for either group.

Blood flow restriction training, known as KAATSU training, is a relatively new concept that is being pushed in the fitness industry. Studies have shown this new training method has shown to significantly increase the size and strength of skeletal muscle using low intensity training (Abe et al., 2005 & Takarada et. al., 2002). If this low-intensity training could be utilized with the elderly population, it may be able to increase function and decrease the risk for future falls, which is the leading cause of fatal injuries among older adults (Fall Prevention Facts, 2016). This training could also be utilized in a patient’s rehabilitation program for more efficient results.

This study assessed if walk exercise with KAATSU would improve muscular fitness and functional ability in aging adults, as it previously had not been studied. However, I do not believe the results of this study are completely valid due to the study design. First off, there is too small of a sample size to consider this study statically significant for the general population. Second, the control group may not be a good representation of the general population, as the majority of the general population may not be walking daily to get physical activity. The control group did not perform the same walk training program as the experimental group. The control group was simply told to continue the active lifestyle they were currently living. Being active can constitute a variety of different things and, therefore, it is unknown what members of the control group where participating in during the study. Therefore, it cannot be determined whether the individuals in the experimental group saw increases in muscular size and strength, along with improved functional ability, as a result of the KAATSU training or from a walking program. The idea of this study was commendable as it appears that KAATSU training can be very beneficial based off of initial findings. If this study was conducted again, in which there was a control group performing the same walking program as the experimental group using KAATSU training, the results would be more valid. During this period of constant change in the health care field, insurance is paying for less visits for patients and it is the job of a physical therapists to become more efficient with his/her treatment. The KAATSU training could be a valuable step to increasing treatment efficiency, however, more valid research needs to be conducted prior to implementation with patients.