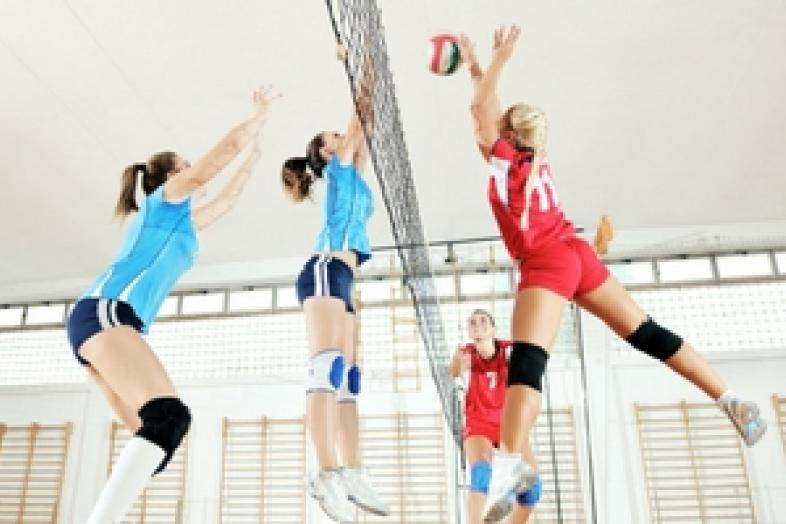 OBJECTIVES: To describe the approach of physical therapy intervention on a patient who is suffering from a non-traumatic clinical instability of the tibiofibular joint combining the use of a proximal tibiofibular support, gentle neural mobilization and neuro-reeducation of stabilizing musculature including proper activation of the VMO.

CASE DESCRIPTION: The patient is a 13-year-old female who presented with non-traumatic lateral knee pain with radiating pain into the anterolateral aspect of the shank. No obvious range of motion discrepancies or strength discrepancies noted.

METHODS: The first visit included a conventional initial evaluation that examined how the initial injury occurred as well as current conditions of the knee. Treatment began with the application of the Epi-Sport epicondylitis clasp, gentle neuromobilization, and progression into a comprehensive home program of activation of specific stabilizing musculature including the vastus medialis oblique, tibialis posterior, deep external rotators of the hip, and the transversus abdominus.

RESULTS:  The described treatment program, as well as the home program given to the patient, resulted in complete almost complete alleviation of pain within the first three weeks of physical therapy. At 4 weeks she reports she successfully returned to competitive volleyball without incident with the proximal tibiofibular brace. At 5 weeks, when last saw patient, she reported maintaining a 100% improvement at full activity level.

DISCUSSION: The combination of bracing the fibular head/neck (with the Epi-Sport epicondylitis clasp) in an attempt to prevent posterior translation of the fibular head into the common peroneal nerve, neural mobilization and re-education of musculature to stabilize the lower quarter may have all contributed to this patient’s successful outcome.

Instability of the proximal tibiofibular (PTF) joint has been in the literature since the 1960’s5, though the number of studies is not extensive. The knee is primarily noted for research on the tibiofemoral and patellofemoral joints, anterior and posterior cruciate ligaments, and the meniscus, and not PTF8. Sekiya and Kuhn state that non-traumatic subluxation in preadolescent females “often resolves with skeletal maturity” and with non-invasive approaches emphasizing “activity modification, supportive straps, and a knee strengthening program” will usually be successful7. Sijbrandij, Turco and Spinella refer to the use of a supportive strap on patients with suspected PTF, though the placement of the strap is not specified9,10.

This case study documents the outcomes of a 13-year-old female with suspected PTF using the Epi-Sport epicondylitis clasp for tennis elbow and modifying it for the proximal tibiofibular joint, combined with neural mobilization and neuromuscular re-education of integral stabilizing muscles at the ankle, knee, hip, and core.

PATIENT HISTORY AND REVIEW OF SYMPTOMS

Patient is a 13-year-old female who presented to the clinic with her father describing right knee pain with insidious gradual onset 2-3 weeks prior. She plays competitive volleyball on a local club team and is assigned to the position of setter, and recalled no significant trauma. 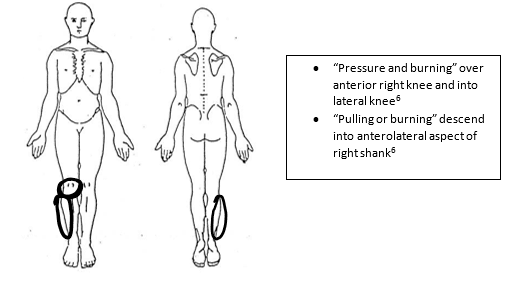 She described her pain as a fairly constant “pressure and burning” over the anterior inferior knee over the patellar ligament and up into the lateral knee6, with “pulling- burning pain” descending distally into the anterolateral aspect of the shank in the typical distribution of the peroneal nerve. At any given time she rates her pain varying between a 4-5/10 on the visual analog scale. On one recent occasion up to a 7/10, when forceful contact was made to the lateral knee at school. Overall reported no improvement since onset. Denies popping/clicking or paresthesia. Denies medication, however states a topical analgesic was applied in the form of an Icy Hot patch at one point, but that aggravated her symptoms. Denies prior right knee pain, but stated a prior episode of left patellofemoral pain which resolved. She stated current right knee pain is “different” and more distinct than the prior the left knee incident. Denies other prior medical history including no prior back, hip or ankle problems6.

Patient scored a 49/80 on the Lower Extremity Functional Scale with quite a bit of difficulty with squatting, going up/down 10 stairs, and making sharp turns while running fast. She also had moderate difficulty with usual hobbies/sports, performing heavy activities around the home, standing for 1 hour, and hopping. Currently not playing volleyball due to her complaint. The patient reported minimal difficulty with typical school work, lifting an object from the floor, rolling over in bed, putting on shoes and socks, and walking either 2 blocks or 1 mile. Actual results displayed below in Figure 1.

There was no sign of effusion, swelling, or erythema on the right knee. Passive flexion and extension mildly increased the pain symptoms on the lateral knee. There was a slight discrepancy in end range knee extension with the right with a softer endfeel compared to the left. Varus joint testing recreated lateral knee pain but symmetrical-stable with the uninvolved. Palpation of the LCL painful.

In order to relieve tension on the peroneal nerve, the Epi-Sport epicondylitis clasp (an elbow support for epicondylitis by FLA Orthopedics) was modified and applied to stabilize the fibular head, attempting to prevent it from being pulled posteriorly into the common peroneal nerve by the lateral biceps tendon (Figures 3, 4, and 5). The patient noted immediate improvement with the brace at the initial appointment. Thus at the next appointment, the focus of the first treatment was to activate the vastus medialis oblique (VMO) without co-contraction of the biceps femoris.  This patient presented with overly pre-dominant hamstring activation, and initially demonstrated significantly difficulty activating the VMO in conjunction the quad in sitting. The use of surface EMG biofeedback was employed to provide the patient with visual and auditory feedback in order to properly activate the VMO in conjunction with the quad while initially avoiding contraction of the hamstrings in a closed chain sitting position at varying angles of knee flexion. Initially, the therapist placed his hand on the tendon of the biceps femoris just lateral to the popliteal fossa to provide inhibitory feedback while the biofeedback provided facilitatory feedback of the VMO/quad. The patient was then also able to sense with her hands and monitor the activity of the biceps tendon while properly activating the quad/VMO this first visit. Gentle seated tibial, peroneal and sciatic nerve mobilization was initiated to promote nerve health1.

At subsequent appointments, in addition to proper VMO activation and nerve mobilization, she was instructed and progressed through a home program of proper activation of the deep hip external rotators without tensor fascia lata activation, eventually in conjunction with gluteus medius to promote hip and lower quarter stability. Transversus abdominus (TA) activation was also introduced for core stability to promote better hip control. In addition, proper activation was instructed of the posterior tibialis in the closed chain, and then later in conjunction with the peroneal longus to promote even better control of the lower quarter. The patient was eventually progressed to co-contract the hamstrings with the VMO, and activate the deep hip external rotators in conjunction with gluteus medius with good TA and ankle control.

Two days after the initial evaluation the patient returned and reported a 20% improvement overall with her symptoms. The pain over the lateral knee had a moderate decrease in pain, the anterior knee pain had a minimum decrease, and the area of the fibular head was reported 30% better. The patient was compliant to wearing the modified epicondylitis support daily except for sleeping for the first four weeks of therapy. Two weeks after the initial visit the patient reported that there was no further shooting pain into the anterolateral calf. She reported no pain at rest. By the third week she reported the symptoms had improved by 97% and only minimal discomfort with light to moderate activity while wearing the brace. The patient returned 16 days later due to holidays, scheduling confusion and return to volleyball. At this last visit, she stated 100% improvement at full activity level. She reported she was only wearing the epicondylitis support during volleyball practice and that she was able to practice at game speed without any increase in pain. Exiting LEFS score of 80/80 depicted below in figure 2. Application of the Epi-Sport epicondylitis clasp described below with figures 3, 4, and 5.

This case potentially demonstrates the successful use of the Epi-Sport epicondylitis clasp for clinical instability of the proximal tibiofibular joint, which may have contributed to her successful outcome. By utilizing this support in this manner, it may have alleviated tension off the peroneal nerve to some degree, and in conjunction with gentle nerve mobilization and with correct activation of musculature, possibly accelerated her recovery. It is worth noting that this patient did take time off of volleyball practice for the first 3 weeks of treatment, and had she been required to continue this activity during this period of her recovery, perhaps the outcome wouldn’t have been as successful. As this is not a commonly seen instability as compared to other knee injuries, knowing how to brace and support this joint when indicated may potentially better “open the window of opportunity” for healing and may be of value when treating this condition.

Financial Disclaimer: Neither author has any financial interest whatsoever in Epi-Sport or FLA Orthopedics. 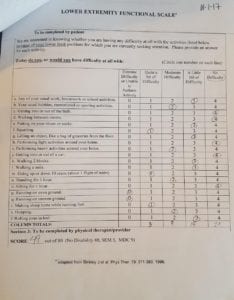 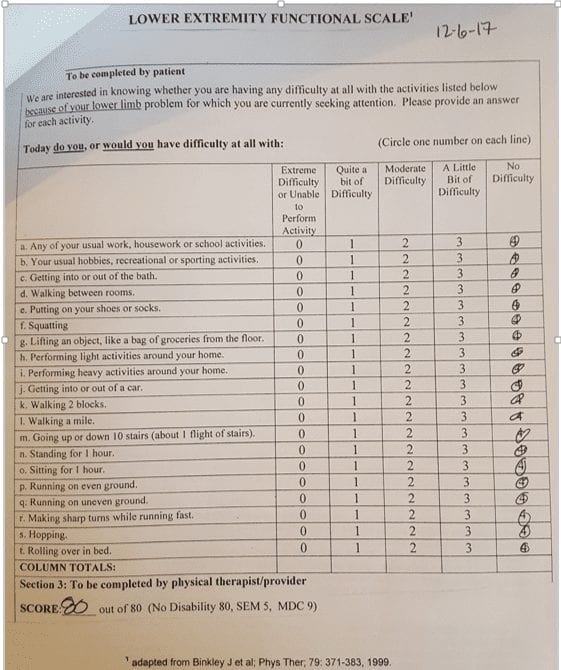 Figure 3: View of posterolateral popliteal fossa right leg. The clasp is tensioned in such a manner that the fibular head is pulled anteriorly (accomplished by placing the brace with wording upside down). If the brace is put on incorrectly, the tension will encourage the fibular head to move posteriorly and likely exacerbate the symptoms if the peroneal nerve is already involved/inflamed.  She initially reported “minor pinching” between the rigid part of the brace and the plastic used to tension the brace, but was able to make adjustments at home by simply moving the strap-plastic loop more posteriorly off the skin. 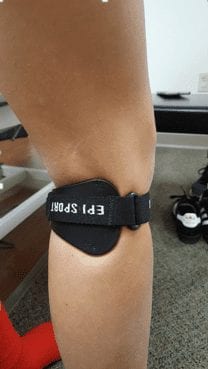 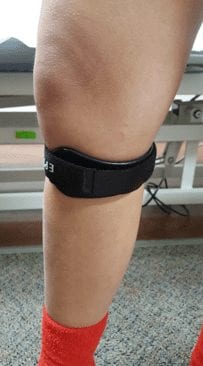 Figure 4: View from medal right knee. The rigid part of the clasp is on the medial side of the knee with the flared end over the tibia supporting the fibular head and neck on the posterolateral side as shown above.

Figure 5: View from anterior lateral aspect of right knee. The tension is applied as the elastic band of the brace is pulled anteriorly so as to reduce the amount of posterior translation of the fibular head. 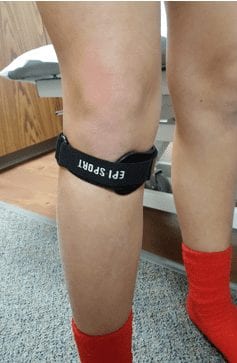