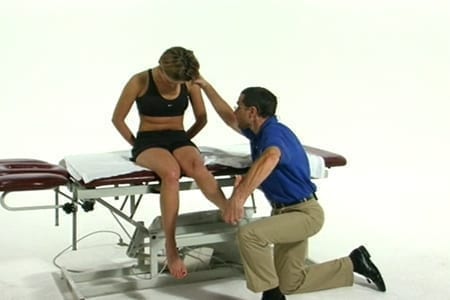 In general, “slider” techniques combine joint movements to create tension in the nerve at one end while releasing tension at the other end. In contrast, “tensioner” techniques combine joint movements to stretch the neural tissue from both ends. The authors cite research which has shown different types of neural mobilization exercises result in different amounts of neural excursion in the upper limbs.1  Similar research has been lacking concerning the lower extremities, and the authors conducted this study to help fill this gap. The authors hypothesized that the slider mobilization exercises would induce greater longitudinal sciatic nerve excursion compared to the tensioner and single-joint nerve-gliding exercises.

The authors report notable factors in this study. First, these findings in the lower limb are consistent with previous findings in the upper limb which may help support a general theoretical construct of nerve excursion during joint movement. Second, the cervical spine flexion used in the tensioner mobilization did not result in significantly more sciatic nerve excursion than the single joint mobilization of the knee.  If cervical spine flexion does not add to neural tension, then the question may be raised concerning its usefulness as part of the slump test. The authors report a similar issue in a previous study that found cervical flexion did not significantly change hip flexion during the straight leg raise test. However this study also noted the use of cervical extension during the slump slider resulted in the largest amount of excursion at this level. Third, sciatic nerve excursion as measured at the posterior mid-thigh region probably does not reflect what is occurring elsewhere along the nerve tract.

The authors are to be commended in providing further information of sciatic neurodynamic mobility specifically at the posterior midthigh in vivo. Especially noteworthy is the demonstration of 4 specific patterns of movement in the seated slump position resulted in a consistent predictable amounts of sciatic nerve excursion at the midthigh. This is consistent with previous upper extremity studies specific to the median nerve, and should contribute to building a theoretical framework concerning how specific combinations of joint movement effects neural mobility. The IAOM was already appreciating the importance of a systematic progression of neural mobilization of the lower extremities targeting specific portions of the sciatic nerve in 1996.4 Since pain free motion helps tissues heal, it is important to continue to refine the most effective techniques to mobilize neural tissue and assist with the healing process.

Although the evidence appears to demonstrate there is very little sciatic nerve excursion in the seated slump position with cervical flexion or knee extension alone, or in combination with each other as a tensioner, the IAOM challenges the authors’ suggestion questioning its usefulness in the seated slump test. This appears to be premature and contradictive, especially in light that this study also supports cervical extension as relieving tension on the sciatic nerve.  A slight change in tension with these movements (with or without a change in excursion) that results in a change in the patient’s symptoms is certainly significant diagnostic information for us.

Also of interest to us is the authors did not include in this study the most distal component of the sciatic neuromobility chain…changes with the ankle in prepositioned dorsiflexion as practiced by the IAOM. Our IAOM colleagues, Gilbert and et al in 2007 demonstrated the significance of this component in the SLR position with and without dorsiflexion altering the displacement and possibly the strain of the lumbosacral nerve roots in the lateral recess.5