EFFECT OF THE PELVIC COMPRESSION BELT ON THE HIP EXTENSOR ACTIVATION PATTERNS OF SACROILIAC JOINT PAIN PATIENTS DURING ONE-LEG STANDING: A PILOT STUDY. 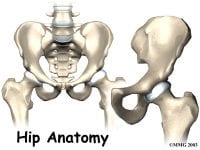 Sacroiliac joint (SIJ) pain is a fairly common source of symptoms, representing about 13% to 30% of patients complaining of non-specific low back pain.1 Form closure (shape and orientation of joint surfaces) and force closure (neuromuscular control) have been described as the mechanisms responsible for the stability of this joint; disruption of one or both of these stability systems could compromise SIJ balance and cause local and/or referred symptoms. (Figure 1)

Pain originating from this structure is classically provoked during activities that involve weight bearing on the affected-side lower extremity, as during stance phase of gait cycle. In this situation, an appropriate balance between the different muscles in the lumbopelvic area is essential to contribute to the form and force closure mechanism of this structure. It has been demonstrated that patients with SIJ pain exhibit altered activation patterns of the biceps femoris and gluteus maximus during one leg standing;2 in these patients, hamstring muscles activate before gluteus maximus during hip extension. This could be an indicator of impaired force closure mechanism, based on the assumption that gluteus maximus muscle has been established as one of the main SIJ stabilizers due to its transverse orientation in respect to the SIJ, generating joint compression and reducing shearing forces.3 In patients with SIJ pain, using a pelvic compression belt could induce this compressive mechanism, and also increase the proprioceptive feedback to the SIJ stabilizing muscles.4

The objective of this pilot study was to compare the effects of the pelvic compression belt on hip extensor muscle activation patterns during one-leg standing in subjects with and without SIJ pain. EMG activation patterns of hip extensor muscles during one-leg standing were measured in thirty-one women (16 subjects with SIJ pain and 15 asymptomatic subjects). Measurements were performed both without any compressive device and wearing a pelvic compression belt.

The results of this study showed significantly greater EMG amplitude of biceps femoris in SIJ pain group subjects compared to participants in the asymptomatic group. However, a reduction of EMG amplitude of the biceps femoris and an increase of EMG amplitude of the gluteus maximus was observed within each group when the pelvic compression belt was worn. There was also a significant reduction in the premotor reaction time (defined as the time between an auditory stimulus just prior to adopting one-leg standing position and the onset of EMG activity) of the gluteus maximus using the pelvic compression belt in the subjects with SIJ pain only. Consistently, premotor biceps femoris reaction time was significantly greater with use of the pelvic compression belt in the SIJ pain group only.

During one-leg standing, the pelvis of the supporting leg has the tendency to rotate anteriorly because of a forward torque generated by the contraction of the hip flexors of the contralateral side. This should be controlled by the proper activation of hip extensors.5 In this regard, Hungerford reported that the pelvis on the side of the supporting limb rotates slightly posterior in subjects without SIJ pain. This supports the concept that posterior pelvic rotation induces SIJ nutation,5 which is considered the most stable position for this joint. In contrast, patients with SIJ pain showed slight forward position of the pelvis of the supporting limb,5 thus creating a relative counternutation position, considered unstable. This motor control deterioration may be explained by improper coordination of hip extensors revealed in the reviewed study. Indeed, it is hypothesized that increased premotor reaction time and increased EMG activation of the biceps femoris decreases capacity of gluteus maximus to activate properly during functional activities.2  A pelvic compression belt seems to increase gluteus maximus activation; possible mechanisms for this improved contraction could be related to increased SIJ stability due to mechanical compression, reduction of SIJ ligament tension (which in turn may reduce neurological inhibition of the gluteus maximus), and increased proprioceptive feedback.

Based on this information, a pelvic compression belt may improve form and force closure mechanisms involved in sacroiliac joint stability. This could be useful not only when suspecting local SIJ involvement, but also when SIJ /pelvic instability contributes to the manifestation of symptoms in patients with other lower quarter problems, for example, as a result of kinetic chain imbalance.