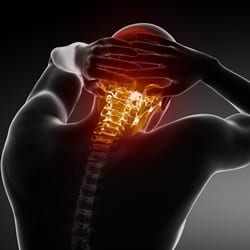 This study was conducted from October of 2006 to December of 2008 and involved the data from 80 individuals with a primary complaint of shoulder pain.  Of those 80 participants, 49 of them showed a successful outcome.  The inclusion criteria for the participants included, aged 18-65 years, primary complaint of shoulder pain and a score of 20% or greater on the Shoulder Pain And Disability Index (SPADI).  The examination and treatment of the participants were completed by 9 physical therapists.  These physical therapists’ assessed patient history, posture and conducted neurological screens.

During the evaluation several shoulder, scapulae and cervical tests were performed.  On the shoulder an example of these tests included the Hawkins-Kennedy, Load and Shift, Neer, Speeds test, Paxinos and a variety of others.  The scapulae tests included functional movements (hand to neck, hand to scapula and hand to opposite shoulder), Lateral Slide Test, and scapular dyskinesia.  The cervical special tests involved Spurling’s, Upper Limb Tension Test, the Distraction Test and many others.  Along with special tests the examination also covered range of motion, manual muscle testing and segmental mobility of the cervical and thoracic spine and ribs.  Participants were also asked to complete self-report measures which incorporated the numeric pain rating scale (NPRS), the SPADI, Modified Fear Avoidance Beliefs Questionnaire (FABQ) and the Tampa Scale for Kinesophobia (TSK).  The questions in the FABQ that were asked regarding the “back” were replaced with the word “shoulder.”  For the treatment session, all participants received the same interventions, which involved 1 non-thrust mobilization to the lower cervical spine and 5 different thrust manipulation techniques to the thoracic spine.  Spine mobility exercises for the cervical and thoracic spine were completed preceding manual therapy.

To establish success in this study the Global Rating of Change (GROC) was implemented.  A score of 4+ or greater, which had varied answers but they correlated to “a great deal better,” was considered to represent clinically meaningful improvements.   According to the authors, “due to the short duration of this study, it would be likely that the clinical outcome would be attributable to the intervention rather than the passage of time.” Thirty-one participants out of the 80 experienced a successful outcome on their second visit and 18 individuals found a successful outcome on their third visit.  The group of participants that exhibited success, surpassed the MCID scores for both the SPADI and the NRPS.  The participants also demonstrated improvement in active range of motion with shoulder flexion.  The data from this study was used to establish suggested prognostic variables in determining the individuals that may benefit from manipulations or mobilizations to the cervicothoracic spine and/or ribs to decrease shoulder pain.  These factors included: Pain-free shoulder flexion of less than 127 degrees, shoulder internal rotation of less than 53 degrees, a negative Neer test, not taking medications of any kind for shoulder pain, and symptom duration less than 90 days.  According to the authors, if individuals participated in the treatment regimen set forth, they would have a 61% chance of success.  If the individuals possessed 3 out of 5 of the prognostic variables then the chance of obtaining a successful outcome, improved from 61% to 89% and 4 out of 5 prognostic factors the probability increased from 89% to a 100%.  The probability of success was based on a 95% confidence interval and a positive likelihood ratio.

The possible mechanism of actions that relate the use of thoracic and cervical mobilizations and manipulations in decreasing shoulder pain were described in this article and other similar articles.  The authors explained a concept of regional interdependence as, “…unrelated impairments in a remote anatomical region may contribute to or be associated with, the patient’s primary complaint.”  A similar study performed described the neurophysiological motor control involved in the scapula and shoulder musculature is restored followed by an increase in strength with the lower trapezius muscle, preceding a thoracic manipulation.  Another possible mechanism is the hypoalgesic effects that come from a thoracic manipulation which can result in decreased shoulder pain and increased shoulder movement.  The hypoalgesic effect is suggested to inhibit C-fiber input which is mediated by the dorsal horn.  The different upper extremity and trunk anatomical regions correlate and work together as a chain to perform various activities and movements at distal and proximal segments, “…ipsilateral side bending, rotation and extension of the thoracic spine have been shown to be associated with normal, non- pathologic overhead shoulder movement.”

I chose this article because of the current trend in performing manipulations within the field of physical therapy.  Aside from the benefits that are directly involved with spinal manipulation to the proximal areas focused on, I wanted to see if other distal body segments would benefit from manipulations and mobilizations.  I believe this article provided sufficient evidence and statistical findings to help determine when to use these manual therapy techniques in assisting with shoulder pain interventions.  I will use this option as another tool, in my tool box with individuals that meet the prognostic factors.  I do agree with the authors in this study and other similar studies, that more research is needed to validate these prognostic factors so clinical prediction rules can be set based on the evidence.  Further research is also needed with appropriate controls to continue determining if these skills in manual therapy do indeed assist in decreasing shoulder pain, as a short-term outcome.