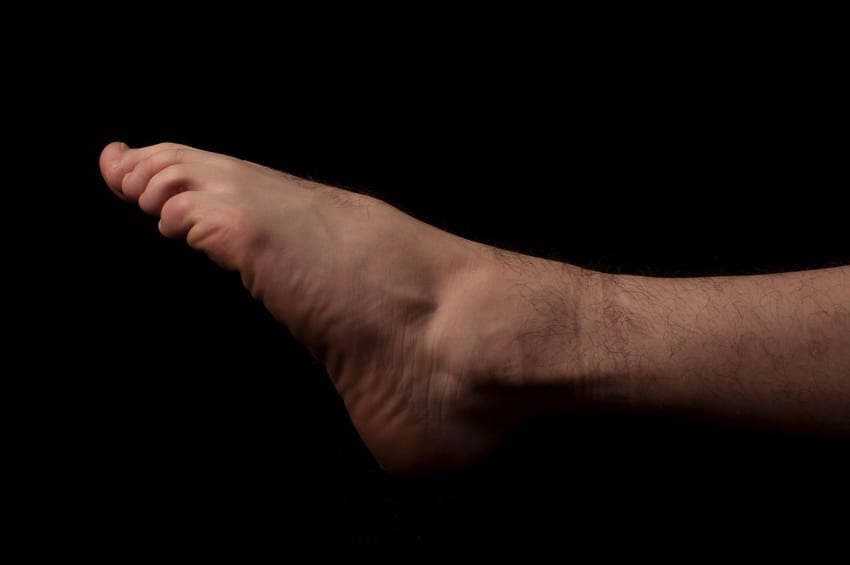 This study utilized 14 young, healthy, and non-trained subjects (7 men, 7 women) to evaluate the effects of unilateral ankle plantar flexor static-stretching on superficial electromyography (sEMG), passive range of motion (ROM), and center of pressure (COP) measures of the dominant, stretched limb during single-leg balance tests and the effects over time.  The study protocol consisted of a baseline evaluation of the subjects’ maximum voluntary isometric contraction (MVIC) using electromyography electrodes placed upon the lateral gastrocnemius in order to express sEMG activity during balance tests as a percentage of MVIC through integrated electromyography (IEMG), maximum ankle dorsiflexion using a fleximeter, and 3 trials of single-leg balance tests of each limb using a force plate to track COP area through the COP speed and frequency of the anterior-posterior and medial-lateral displacement.  After baseline testing, intervention was implemented consisting of 6 repetitions of passive dorsiflexion of the dominant limb for 45 seconds with 15 second rest periods in between at 70-90% of the subject’s point of discomfort.  Post evaluation consisted of duplication of maximum ankle dorsiflexion measurements and 3 trials of single-leg balance tests completed in the baseline evaluation at intervals:  immediately post-intervention of both limbs, 10 minutes post-intervention of stretched limb only, and 20 minutes post-intervention of stretched limb only.

Results revealed a significant increase in passive ROM measurements.  Pre- and Post- testing mean ROM measurements are as follows:  15.0 ± 6° and 21.5 ± 7°, respectively.  Balance results demonstrated an increase in the COP area as well as IEMG activity when comparing pre-stretching to immediate post-testing (Figure 1).  However, these changes were no longer significant at 10 and 20 minutes post-stretching.  The authors suggest the changes in COP area “might be related to changes in both peripheral neural (proprioception) and mechanical output (musculotendinous unit or stiffness) affecting the ability to adapt adequately to the stability changes”.  They also suggest these changes may disrupt the balance of afferent input to the central nervous system and muscular output.  Interesting to note though, the increase in COP area was found in both the stretched and non-stretched limb immediately post-stretching.  The increase in sEMG activity immediate post-stretching was not supported by previous studies; however, authors suggest that perhaps the stretching protocol led to alterations in the length-force relationship of the muscles modifying proprioceptive feedback and coordination subsequently increasing the demand for muscle activation to stabilize the joint.

Overall, the authors are aware the study presents with limitations, particularly of the generalizability of the results to unhealthy and athletic populations due to the subject selection criteria, and although it is unknown whether or not these effects of static-stretching will increase the risk of injury, it is the authors’ hope that these effects of static-stretching on balance and muscle activity may inform physiotherapist/physical therapist, sports scientist, strength and conditioning coaches, and athletic trainers when making clinical decisions whether or not to stretch clients/patients prior to rehabilitation or athletic activities.

Static-stretching (SS) prior to athletic activities and rehabilitation has been a long standing and well-known tradition for many years.  Rather recent investigations, along with this study, have brought to light the potential negative effects SS can have on individuals’ balance, movement time, and agility.  While research regarding whether these effects can increase the risk of injury is still in its infancy, it is exciting to become a part of a potentially monumental change that could lead to improvements for individuals on the field and off the field in the rehabilitation setting.  I, personally, have given way to tradition beginning rehabilitation with a SS protocol prior to strength and balance activities.  But as research points out SS may alter the reflex activity and spinal reflex excitability altering the ability of the muscle to detect and respond to changes of an unstable environment posing the question, am I putting patients at further risk of injury to an already compromised extremity?  On the contrary, studies have shown these effects to be specific to age, gender, stretch duration and intensity.  Also, similarly to the present study, Damasceno MV et al. found increases in muscle activation post SS giving rise to another question, could an increase in muscle activity be a goal of the rehab process as well?

As I dive further into the evidence regarding the effects of SS, it becomes apparent that perhaps the issue at hand is more in depth than previously thought.  It demonstrates the need for professionally trained clinicians to weigh the benefits and negative side effects of SS on a case by case basis to determine appropriate implementation of SS and whether or not a dynamic stretching protocol would be more appropriate as support by Chatzopoulos D et al.  Therefore, could we, as physical therapists, be at the forefront of educating others and implementing these changes making a positive impact on present and future generations?