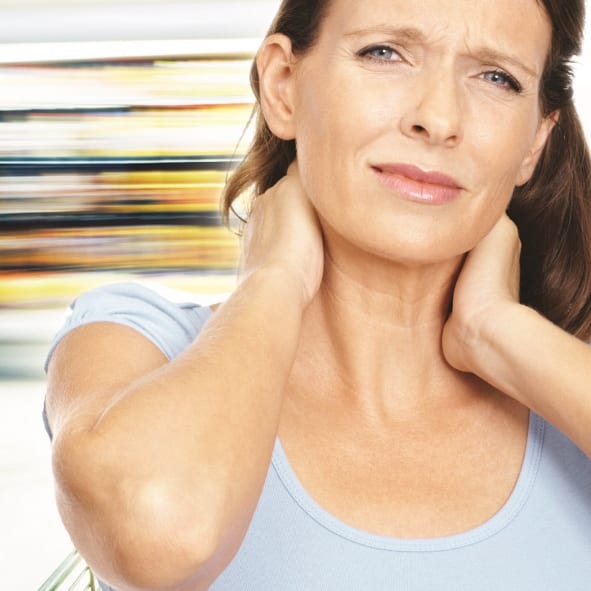 It is thought that kinaesthesia in the cervical spine after a whiplash injury is an important consideration for recovery from neck pain.  Early identification of those patients that eventually develop cervical kinaesthesia deficits might help with treatment management. The purpose of this year-long prospective study was to determine the course of cervical kinaesthesia in whiplash injury subjects through two movement control tests and to determine test association with patient-reported questionnaires. Seventy-four subjects from the age of 18 to 65, suffering whiplash associated disorder (WAD) I, II or III, were recruited from a University Hospital emergency room in Iceland from December of 2006 to September of 2009 via phone contact 3 weeks after motor vehicular collision (MVC).  Participating subjects underwent movement control and questionnaire (VAS scale, Neck Disability Index: NDI, and TAMPA: measuring fear of movement) testing at 1, 3, 6 and 12 months after MVC, of which 47 subjects completed all testing.   Subjects were classified as improvers and non-improvers with respect to each control test.  The Fly test was administered to measure tracking accuracy using a cursor on a computer screen and the Head-Neck Relocation (HNR) test was administered using Fastrak device to assess active relocation accuracy to neutral from fully rotated positions right and left.  Three movement patterns were traced on the Fly test, repeating 3 times with a 10 second rest between trials in random order.  HNR was completed with the patient being instructed to relocate as accurately as possible from left to neutral and right to neutral 3x alternately.  The authors hypothesized that those subjects who developed cervical kinaesthesia by the 1st month would develop persistent deficits at 6 and 12 months.  Paired t-tests were used with significance set to P=0.05, measuring mean error for the Fly test and HNP, calculated as a sum of the 3 patterns and the sum of right and left sides, since there was no difference between patterns and sides.  ANOVA was used to assess measurement difference over time.  Two-way ANOVA and Pearson’s correlation coefficient was used to determine associations between movement tests and questionnaire findings.  Twenty-five participants improved and 24 worsened accuracy on the Fly test, while 25 improved and 22 worsened accuracy on the HNR test.  Between group (improved and not improved) accuracy differences were not significant at 1 months, but were at 12 months on the Fly test (P=0.004). For the HNR test, the non-improvement group had less relocation error (P=0.002) at one month, but worse after 12 months (P=0.019).  Significant association was found only on NDI results for the non-improving Fly and the improving NIG groups.  The authors note that about ½ of MVC subjects with WAD improved their kinaesthesia accuracy over a one year timeframe, and that there was generally poor correlation between improvement/non-improvement groups with patient-reported pain, disability and fear questionnaires.  The authors highlighted the need to develop better ways to prospectively identify patients likely to develop cervical kinaesthesia.

Once again, WAD demonstrates its unique ability to defy prediction and to prove non-cooperative to simple classification.   The first thing that came to mind on the test-re-test results from one to twelve months is that , given a novel motor task, maybe it isn’t surprising that about ½ improved and ½ did not.  It seems perplexing that the non-improvers had better scores to start with, until you consider that taking all 47 subjects results, there was no difference from one to twelve months.  Maybe we can then argue that, as a whole, we are witnessing a reversion to the mean.  I think that makes the most sense.  This study ultimately suggests that tracking and relocation accuracy is not useful in terms of predicting outcomes in WAD.  I would like to see a couple of things.  What does the research say about accuracy for normals?  What is the two test’s reliability? If the data is out there, I find it strange that it isn’t presented here.  Moreover, it is fascinating that only ½ of subjects demonstrated improved or worsened accuracy in both tests, while there was divergence in the other ½.  Again, I think this argues for reversion to the mean.  The authors felt that the tests represent two different kinematic variables. If that was the case, one might expect to see some pattern emerge, but this was not so.  The study illustrates the difficulty in motor control investigation, particularly for subjects as potentially complicated as those suffering from WAD.